The remaining 6 of my Nestle Quality Street reviews, continued from Friday. In case you don’t want to click back, “Nestle’s Quality Street is a variety pack of cheapo chocolates that’s pretty ubiquitous in the UK.” Onward! 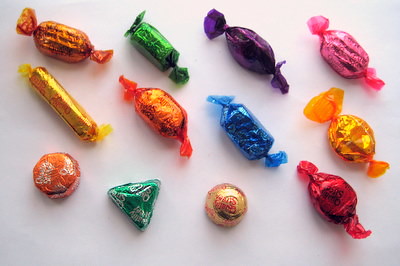 Orange Chocolate Crunch (bottom left) is a flat disk of orange flavored chocolate with little crunchy bits throughout. A poor knockoff of a Terry’s Chocolate Orange Segsation, if you will. Orange chocolate can go well when it’s made with care and decent ingredients. This has neither.

The Purple One (first row, 3rd from left) is unlabeled to create a sense of mystery, though an asterisk does warn that it may contain nuts. It turned out to be a milk chocolate shell containing a flowing, nearly liquid caramel and a hazelnutty paste. Creative in composition, at least comparatively, but meh with Quality Street’s cost-cutting execution. 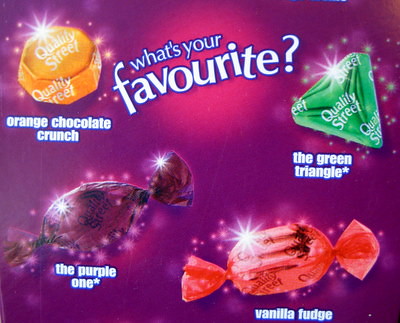 At first thought, Vanilla Fudge (top right corner) sounds oxymoronic, but a quick googling reminds me that fudge need not be chocolate flavored. This piece tasted neither of vanilla nor of chocolate fudge. No good.

The Toffee Finger (second row, far left) is the same sticky, jaw-achingly chewy toffee of the toffee penny, just in stick form and covered in a thin layer of milk chocolate. The finger shape does make eating it a bit more manageable, so points for that, but it loses all of those points because of the terrible, barely-even-qualifies-as-chocolate-ness of the coating. 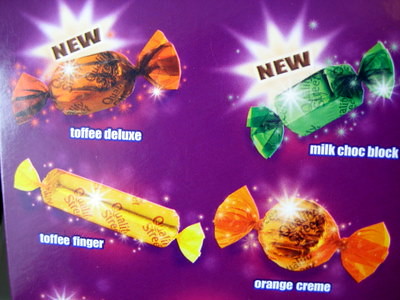 Toffee Deluxe was highlighted on the box as being new. It’s slightly darker than the other toffees and a bit more buttery, more like the Brach’s Milk Maid style of caramels we’re used to in the states.

It’s laughable how this assortment has the word “quality” in its name, as it’s anything but. It’s not horrible, spit-it-out chocolate, but it is bad, take-one-bite-and-you’re-done chocolate. The chocolate base of everything is just blah and blech. Save your money and go elsewhere. Nestle’s Quality Street has the dubious distinction of earning my very first — rating. Congratulations!

Jim from The Chocolate Mission, on the other hand, rather enjoyed these. Maybe it’s a British thing, as there must be a reason why they’re practically in institution there?