Starburst Choozers are “fruit flavoured chews with liquid centre made with real fruit juices.” Did you catch those UK spellings? Yup – these guys are, at least for now, only available abroad.

My pack had 10 Choozers unevenly distributed amongst 3 flavors: 6 pineapple & orange, 3 orange & mango, and 1 raspberry & orange. Though the unbalanced flavor distribution was a tad annoying, the pineapple & orange were my favorites, so that worked out well for me.

Starburst Choozers are basically like Gushers, just with a Starburst chew outside. The chew was slightly stiffer than that of regular Starbursts, while the liquid centers were a cool, non-oozy goo. 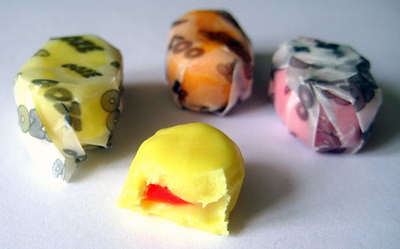 Pineapple & orange had a nicely pineapple-astringent chew. It was hard to get a feel or taste for the liquid center in this chew. Still, I enjoyed this one the most, and it made me wish that Starburst fruit chews came in pineapple.

In orange & mango, both flavors were distinguishable. Mango overpowers at first, then gives way to a tart orange. In raspberry & orange, it’s all the taste of seedy raspberry, with a slightly plasticky aftertaste.

I wish I could buy a pack of all pineapple chews (I guess they do make a pineapple Hi-Chew for that). The pineapple & orange get an OM, the orange & mango gets an O, and the raspberry & orange gets a –. Overall, I give the pack an O, as I doubt all packs are as favorably flavor imbalanced as mine was.