I thought I’d stumbled across a great candy find when I found this among other international bars at Coco Moka in Houston’s airport. Then I started seeing it everywhere and realized that it wasn’t so special after all. Apparently there was a successful petition to bring them to the US, though I can’t imagine why. I know there are plenty of better tasting UK candy bars out there.

The wrapper describes the Coffee Crisp as “wafers with coffee creme center”. Upon unwrapping the bar, I was inundated by a strong smell of chocolate, bitter coffee, and wafer. The bar itself is humongous. It’s big, thick, and dense.

For all its strong coffee smell, I couldn’t taste any coffee. I pretty much tasted just wafers and poor quality chocolate. There was also a faint lingering bitterness that was very slight. If you’re going to call your bar a Coffee Crisp, shouldn’t it taste like coffee? Instead, this is pretty much all crisp, and greasy, yicky crisp at that. A —. 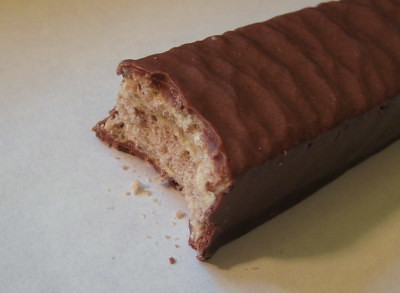 Cybele and Sera basically agreed with me. I know they didn’t sign that petition.