My friend Laura spent a semester abroad in Denmark and was kind enough to bring me back a box of Mini Froer by Carletti. Froer is Danish for frog, and Mini Froer are chocolate frog truffles. I love how Harry Potter-ish these guys are. I wonder if J.K. Rowling had visited Denmark before she wrote them into her books. 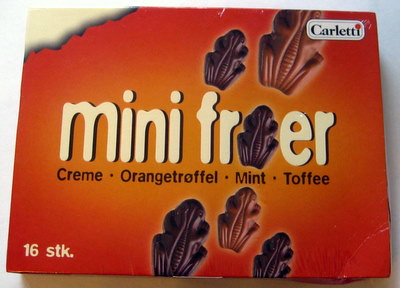 The mini froer assortment I got had four varieties: cream, mint, orange, and toffee.

The “lys med oragetroffel”, or milk with orange truffle, had a nice orange flavor. It was subtle and zesty (as in orange rind zest, not full of life zest) instead of being sweet and super citrusy or juicy, and I liked that unusual rind taste. The milk chocolate froggy shell was sweet with a slight sourness, and the filling was very soft – just short of flowing. I’d give it an OM.

“Lys med toffee” was milk chocolate with a toffee truffle filling. I think of toffee as the brittle, hard stuff. This toffee was almost like a caramel but without any stickiness. It had a nice, dark complexity, making the toffee flavor my favorite of the bunch. An OM bordering on OMG because the chocolate wasn’t of spectacular quality. 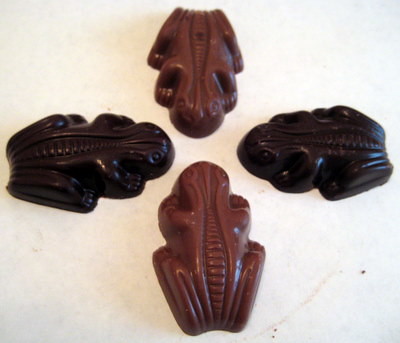 The two dark chocolate truffles were “mork med creme” and “mork med mint”, which the box translated as bitter with cream and bitter with mint. These two contained an opaque white liquid center instead of the ganache-like center of the two milk frogs. The mint flavoring was very mild, while the creme had some sort of weird aftertaste that was almost minty. In fact, I thought the creme was the mint until I tasted the real mint one (which was truly minty) and realized that it was creme after all. I didn’t like these two as much as the milk chocolate versions of the frog because the filling flavor wasn’t exactly pleasant in either case, so they get just an O.

I loved the adorable little frog designs, and the box they came in had a nice flip up lid. You can’t tell from the photo, but the frogs that adorn the lid are actually embossed on there. Still, these appear to be a fairly common candy in Denmark, like something you’d pick up at a drugstore rather than at a boutique, and I think they’re a great little treat for their price range.