I think it’s time to update my favorite candies page, as I’ve found a wonderful replacement for my 100 Grand love: the Nestle Lion.

I bought the Nestle Lion from The Candy Store in San Francisco. I’ve since seen it in Austin at Central Market (where it cost half as much as it did at The Candy Store, by the way). It caught my eye because it was a chocolate bar in the international section that I had never heard of, and there were no indications on the wrapper as to what it was, exactly. One of the proprietors of The Candy Store was able to tell me what was inside; I don’t remember how she described it, but it was enough for me to want to buy it.

And now to end the suspense of what a Nestle Lion is: A wafer cookie (the kind with layers of thin wafer and cream) covered with caramel and rice crisps, all enrobed in milk chocolate. Or sheer deliciousness in candy bar form. 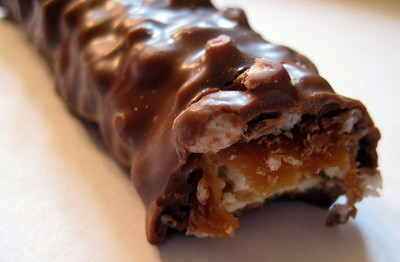 The thin strip of caramel was sweet and chewy but not sticky, so it didn’t get caught in my teeth. The rice crisps were extra puffy, giving the bar a great lightness that I loved. I thought the Lion was a better version of a 100 Grand because the wafer cookie and the extra puffy crisps make the Lion a less dense and more texturally pleasing bar. I also liked that the Lion had less caramel than the 100 Grand, as I get annoyed when I have to somehow surreptitiously get all that 100 Grand caramel out of the nooks and crannies of my teeth (though I’m sure for some, that’s a selling point).

I really enjoyed the Nestle Lion, even though it was still a little sweet for my taste. It was one of those bars that I had to give away the rest of, lest I ate it all myself. An OMG from me. If the caramel was a little duskier or if it came in dark chocolate, there would be no question that it would earn a ZOMG. But because I could bear to give it away, I knew the Lion fell short of my highest rating.