Lindt‘s “A Touch of Sea Salt” bar has been on the market for a while: Chocablog covered it way back in August 2008, and Cybele wrote about it last October. I finally picked one up last week because it was on sale at good old Wegmans. 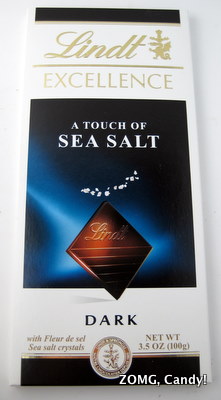 The package design is simple – a balanced Lindt square with a visible sprinkle of coarse salt and the curiously (carelessly?) capitalized note, “with Fleur de sel Sea salt crystals”. I love the blaze of blue in the background. A bit reminiscent of a PowerPoint slide, yes, but also pretty!

The chocolate itself looks like standard dark Lindt squares, with Lindt Excellence’s characteristic deep sheen and sharp snap. Unlike in the Salazon bars, there were no visible grains of salt. Unsurprisingly, the taste of salt was also far more mild in the Lindt bar. 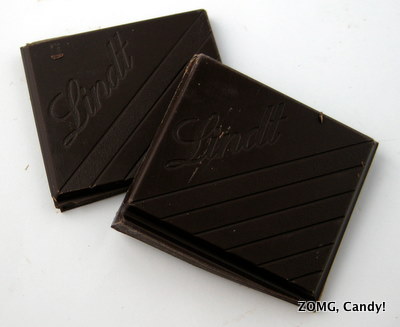 The chocolate had a dark, thick, and glossy melt. It tasted deeply of cocoa but was sweeter than I remembered dark Lindt bars being. A glance at the back of the package showed that it had just a minimum of 47% cocoa solids, which put the relative sweetness in context.

The salt really was just a touch – a few grains here and there. When the fleur de sel did flash on my palate, it brought out a nice sweet and sourness to the chocolate (in a fruity way rather than a cheap Chinese takeout way).

I think this is a fine addition to the Lindt line and a great bar for everyday snacking. It wasn’t as complex as the Salazon line, but I found it quite admirable for a mass market bar. An OM.