I received several fun-sized bags of Caramel Apple Sugar Babies last Halloween in my NCA goodie bag. I thought they were a new product, but apparently they’ve been around for a while, as Candy Blog and Candy Addict both reviewed them back in 2007. 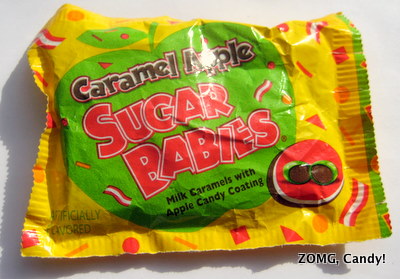 The wrapper called them “milk caramels with apple candy coating.” To me, they were like a chewy version of caramel apple lollipops (which I love).

They had a shiny panned shell in a cheerful shade of bright green. The shell was slightly crumbly, like that of jelly beans. It tasted of sweetly tart green apples, with a lovely brightness. 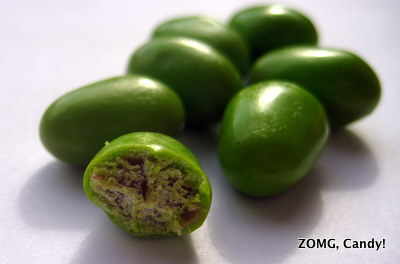 They’re far from gourmet treats, and after a hand/fun pack-ful, the sweetness becomes overpowering, but I found them tastily addictive. An OM.