These Jamin truffles were a gift from my friend Neil, who’s currently living and working in the Netherlands. He was thoughtful enough to bring back lots of Dutch treats while he was back in the States for the winter holidays. 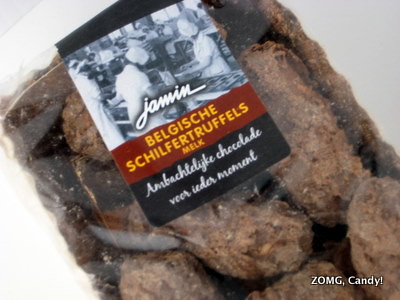 I think these truffles are billed as Belgian (I don’t speak Dutch, but Belgische is close enough for me to venture forth with that guess). They were log shaped, which does lend some unfortunate visual connotations. I believe they were meant to emulate their fungi namesake.

The outer layer was comprised of milk chocolate flakes, while inside was a paler milk chocolate ganache. The ganache was dry and first crumbled, then melted thinly and fattily. 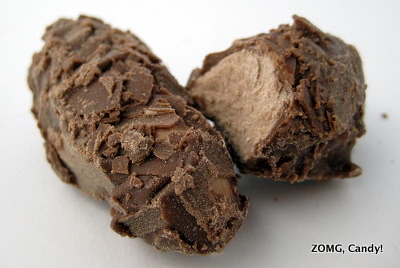 It was quite sweet, with a chocolate flavor that tended toward the powdered cocoa end of the spectrum. There was a hint of duskiness to it, with a strong sweetness and a hint of fruitiness.

Between the fatty melt and the sweetness, they felt almost overwhelmingly indulgent. They were good upon first bite or two but became cloying after that. An O.