Here’s another guest review from ex-pat Neil while I try to catch up from being out of town for most of last week. ~Rosa

Recent trips to Germany & Austria have refilled the never-empty pantry here. I’ve tried the Viba Mandel-nougat which came from one of those countries (sorry, I should take better notes while shopping!)

I was expecting a crunchy single bar from this. Instead, I got 3 mini-logs, each about the size of my thumb, with a flattened, patterened underbelly of the chocolate base. They looked dried out; this was fortunately not the case.

The texture is much softer than I expected. I think if I’d squished and poked any of the pieces before biting in, that would’ve been obvious. The majority of each piece seems to just be slightly hardened nut butter. While the label tells me that it’s almond-based, it never tasted overwhelmingly of almonds, more like halfway between cashews and peanuts. 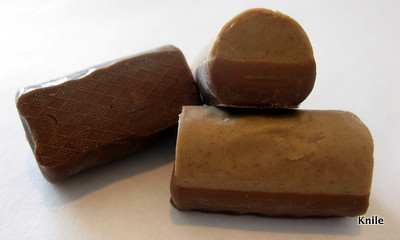 This was a bit of a disappointment. There’s not a ton of flavor overall, and very little sweetness. It’s almost hard to know that the chocolate is there, except that said base is a bit more rigid than the nut portion. In each piece, I discovered some slightly crunchy bits that were either nuts or crystallized sugar, but more likely the latter.

The Viba Mandel-nougat was not my best find, but I’m sure it was inexpensive, probably less than a Euro or two. I wouldn’t buy it again. If somebody had just handed it to me and not told me it was almond, I would’ve been a bit happier. It wasn’t terrible, though, so I’ll give it a nice basic O.