I’ve seen these giant Smarties (BUY!) (not to be confused with Nestle’s Giant Smarties; outside the US, Smarties are an M&M-like sugar coated candy made by Nestle) in Walgreen’s candy aisle for a while now and finally decided to buy a roll. 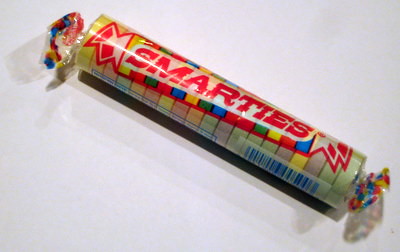 I adore Smarties (BUY!), even if they don’t taste like much. These giant Smarties are basically larger versions of normal sized Smarties. Cybele on Candy Blog has a nice photo showing the size comparison, though I’m a little confused as to whether her Mega Smarties are the same as my giant Smarties (check out comment #12). Mine were also quarter-sized, so maybe I bought Mega Smarties?

The giant (Mega?) Smarties taste just like normal Smarties – the same sweet, lightly fruity and tart taste of compressed sugar. Yum! In the large version, the flavor differences are really noticeable because there’s so much more Smartie. I liked being able to really taste the flavor, but I think the Smartie was too big, and too much Smartie in one take. For some reason, the big ones didn’t come in white like normal Smarties do. Not that I could tell what flavor white Smarties are. 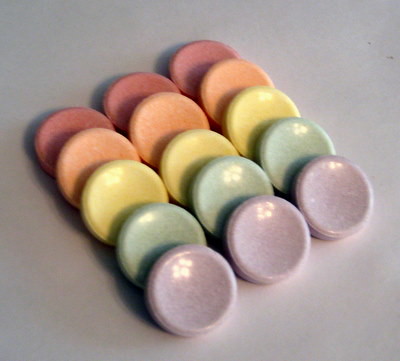 Like Cybele, I wished that the giant Smarties were more crumbly. Normal Smarties shed chalky power everywhere, and they quickly crunched up into dust. The giant Smarties are crunchier and sturdier and break into harder, grittier bits rather than that nice, soft dust. They’re not as hard as SweeTarts, but they’re getting there.

An O for the giant Smarties. Fun to try once, and visually entertaining, but I prefer the smaller version. The giant Smarties are texturally not as appealing, and they disappear too quickly because of their large size. Normal Smarties forced you to pace yourself.