Chocolate and mint is a classically delicious combination. I bet the Girl Scouts owe their continued existence to the continued financial support of Thin Mint sales. I’ve already reviewed quite a few chocolate and mint candies on the site. Here are three more. 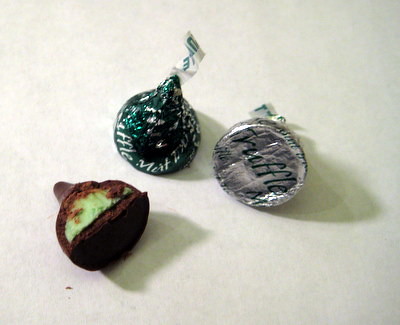 Yet another variety of Kiss from Hershey’s (excellent photos of the lineup here), this time a molded chocolate shell with a mint truffle filling. The mint filling was soft and only lightly minty. There’s not much of a mint finish, but it’s there. I’d prefer more mintiness, so an O. 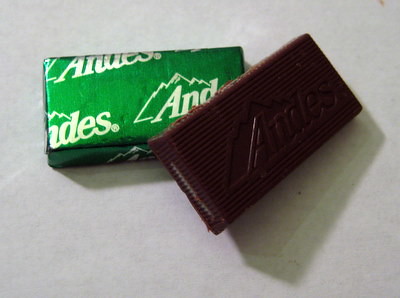 In my mind, Andes mints are the classic chocolate mint. As a kid, the shiny foil wrappers made them seem super fancy, and the mints within were such a treat. Now that I’ve revisited them as an older candy eater, I was surprised at how light the mintiness was. I guess it seemed stronger while I was a kid. They were duskier than the Mint Truffle Kisses and had a crisp snap. An O. 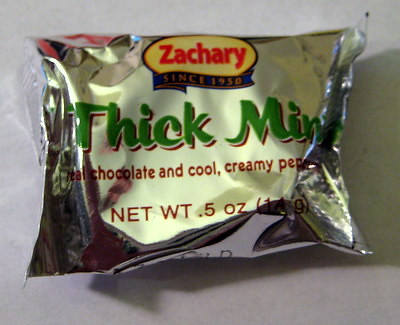 I’d never heard of Zachary Thick Mints until I stole this one from my friend’s I-banking gift basket. The wrapper says it’s “real chocolate and cool, creamy peppermint.” It’s quite similar to a York Peppermint Patty, only smaller and thicker. 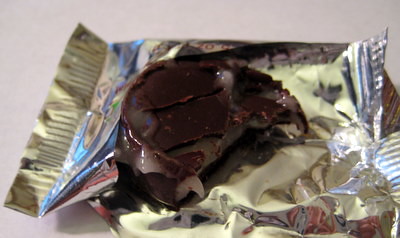 The mint paste inside was thick and only minty in the finish. I also found it rather salty. An O, as it’s too weak in mintiness for my sake.

Basically, all three of these chocolate/mint combinations were too tepid for my taste. Give me richer chocolate and more powerful mint flavors, and then we’ll talk.