When I asked for UK candy recommendations, Justin suggested that I try the Cadbury Double Decker. I’m glad he did, as it was quite enjoyable. On my first day of “work” in lab, I popped into a post office to buy a notebook. Unlike in the US, UK post offices seem to be personal small businesses, and they’re usually attached to a larger shop. The one on the road where I’m staying was part of a mini-mart/convenience store, so I also grabbed a Double Decker, making it the first candy bar I bought in England.

I apologize for the deflated wrapper picture – I didn’t have any food to bring to my first day of lab since I’d just arrived in the country, and I got hungry and ate part of the bar before I could photograph it as a whole. I had intended to buy a second one, but England has yielded so many new candies and chocolates that I haven’t had a chance to yet.

The wrapper boasts of “milk chocolate with smooth, chewy nougatine and crisp, crunchy cereal filling,” a combination that, as far as I know, doesn’t have a US equivalent. The bar is called a Double Decker because it’s divided in half horizontally, like a double-decker bus. The top half is the nougat, while the bottom half is crisped rice and chocolate. And the whole bar is covered in Cadbury’s milk chocolate. 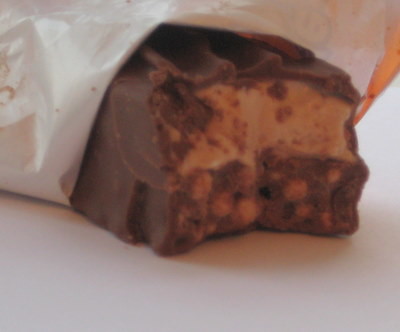 The nougat was pretty chewy, like the inside of a US Milky Way bar, only without any caramel. To put it another way, it was thicker and stickier than the nougat inside of a 3 Musketeers.? The crisped rice was basically what one would expect from crisped rice and chocolate (a pairing that’s hard to screw up), and with the nougat, it made for a great texture combination. Finally, the Cadbury chocolate made a positive contribution with its creamy dairy notes. So much better than Hershey’s! An OMG for the bar. If you want a British take on the Double Decker, check out Chocablog’s review.