More “discontinued” and thus discounted goodness from Wegman’s, this time in the form of two Camille Bloch Mousse chocolate bars, a caramel and a noisette. 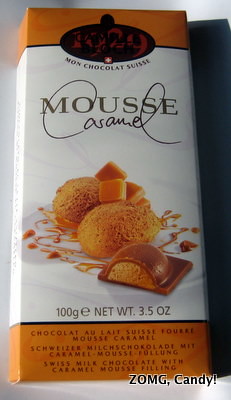 The two bars are quite similar, “Swiss milk chocolate with ___ mousse filling.” Caramel goes in the blank for the former; hazelnut for the noisette.

I love the pictures of the mousse on the outside. They look like twin scoops of ice cream deliciousness that wouldn’t be out of place in a fine dining establishment. And a neat detail I didn’t notice until I photographed the boxes: the seal at the top says Camille Bloch, but when it catches the light just right – or when it’s being photographed – it’s overlaid with 1929, which I’m guessing is their year of founding. 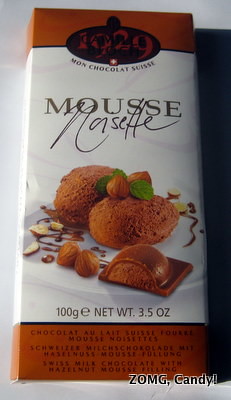 Each 100 g bar had eight squares of chocolate mousse pods. They remind me of pill packs, only with chocolate instead of plastic and foil, and mousse instead of drugs. And you can’t pop the mousse out of the chocolate.

The Swiss milk chocolate is quite rich. It’s soft, with a non-existent snap (hence the ragged edges around the squares in my photos). It’s tongue-coatingly thick and has strong, creamy caramel notes with a sweetness to the finish. I should add that the milk chocolate in both bars tastes the same, so it’s not the caramel mousse that’s lending those caramel notes. 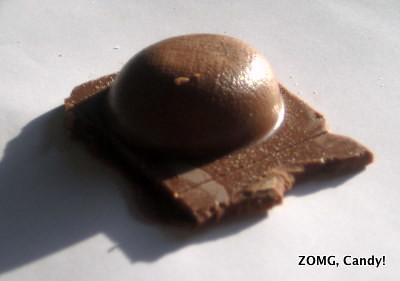 The mousse inside is light and fluffy. I don’t even want to think about all the bad-for-you things they must’ve used to achieve that wonderful texture.

The caramel mousse was nutty, with a mild caramel flavor. It was okay, but I wanted more oomph, more creme brulee/flan/scorched sugar flavor. 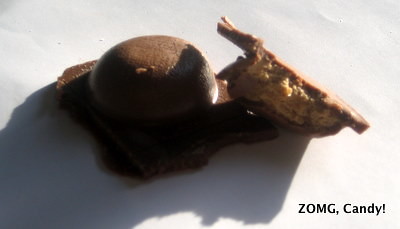 Hazelnut was better. Its hazelnuttiness was light, like a mellowed-out Nutella, and a bit more interesting than the meh caramel.

All in all, I’d give these guys an O. I don’t think I would buy them again for myself, as they taste good, but not extraordinarily so. I do think, however, that these would be good for gift-giving or sharing, thanks to their pretty packaging and unique form. It’s definitely not your average chocolate bar, and I think it makes an impression.