I found the British Cadbury Crunchie (BUY!) at Coco Moka in Houston’s airport.

The wrapper promised “milk chocolate with a golden honeycomb centre,” so I expected that it would be something similar to the Violet Crumble, and I was right. However, I liked the Cadbury Crunchie more. The honeycomb center (or centre) of the Cadbury Crunchie was darker and had a more complex burnt sugar flavor. It was also less styrofoamy than the Violet Crumble, so it was less dry on the tongue. 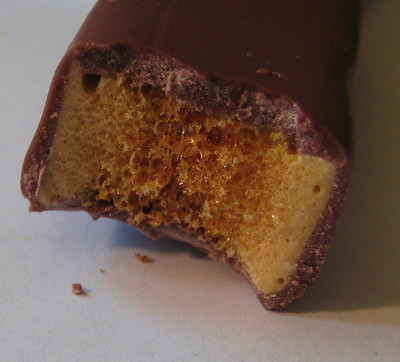 Despite being better than the Violet Crumble, the Cadbury Crunchie still falls far short of the chocolate/honeycomb perfection attained by the Dark Sponge of Economy Candy because its honeycomb center is that fake foamy thing. My first two bites made me want to give it an OMG, but a third bite put me in sweetness overload, so I demoted its ranking to an OM. Perhaps if I’d tasted the treat sized version (BUY!), I would’ve let it keep that higher rating. Even the nice touch of the decorated bottom couldn’t change the fact that the sweet milk chocolate plus the dense and sweet honeycomb adds up to an overly cloying bar. 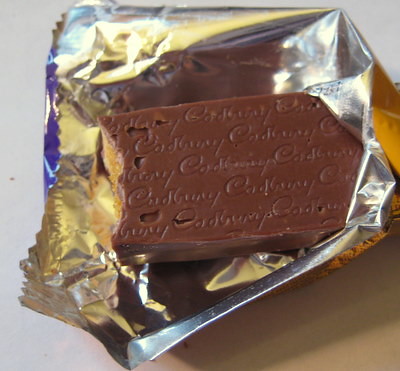