More Asian candy, including one actually bought in Asia. Oooh!

This chocolate bar was given to me by my suitemate’s Japanese friends who came all the way from Japan to visit her. I have no clue what it’s called; I’ve chosen to dub it Japanese Money Chocolate because it came wrapped up to look like a piece of Japanese paper money and had a fake paperboard piece inside as well. I didn’t get a picture of it before I unwrapped it, but here’s a terrible shot of the wrapper, if you want to take a look. 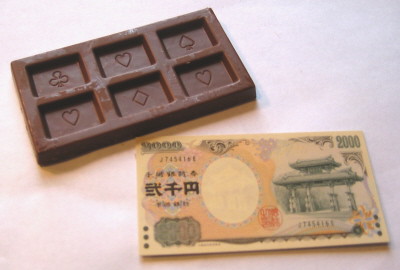 The bar was quite prettily imprinted with playing card suits. Why, I don’t know, but why not? It was darker and smokier tasting than what I expected, and it was filled with rice crispies, giving it a nice toastiness. It looks rather greasy in the photo (and it was greasy in person), but the chocolate was actually pretty nice, smooth and not at all oily. I ate the whole bar (about the size of a credit card) in one sitting. An OM.

This bubble gum found me via my friend Cassie, who bought them on a Sanrio store shopping spree. Aren’t the wrappers adorable? I tasted the green one: Chibimaru kiwi fruit. The gum also comes in other flavors (raspberry, lemon, orange), which I didn’t taste. 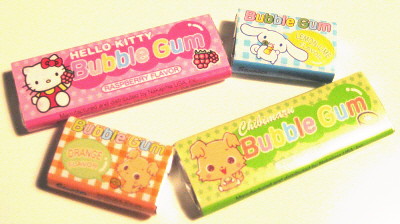 The gum came in three attached but breakable segments and was snow white. I expected it to be green like the wrapper or like kiwis, but whatever. It was lightly sweet and fruity with a velvety texture, almost fuzzy on my tongue. An interesting textural sensation with a nice, light flavor. I’d give this gum an O. The flavor lasted for an annoying short time, and because the gum came from the Sanrio store, it was probably overpriced.

One thought on “Asian Candies IV”