Annabelle?s Rocky Road is a retro candy that?s easily distinguishable by its bright red wrapper. I first read about Annabelle?s, who also makes the Abba Zabba and the Big Hunk, in Steve Almond?s Candy Freak. The wrapper promises milk chocolate coated marshmallow with cashews, which I was excited about, as it?s hard to go wrong with chocolate covered marshmallows.

The Rocky Road’s flimsy wrapper did nothing to protect the bar inside. As you can tell in the photo below, the chocolate coating was broken into bits. They stayed adhered to the marshmallow for the most part, but enough tiny pieces of chocolate fell off as I unwrapped the bar to be an annoyance, mostly because such tiny bits melt easily and make a mess.

The cashews turned out to be miniscule bits mixed in with the chocolate that sat on top of the bar. They were hard to make out in texture or taste and didn?t add much to the bar. Then again, I guess I shouldn?t be surprised, as I?ve previously found cashews to be too weakly flavored to hold their own in chocolate confections. 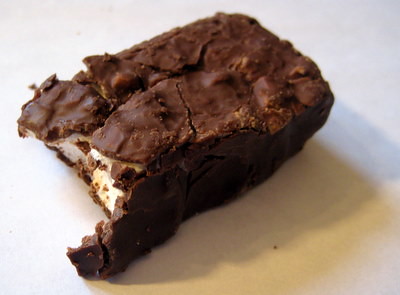 The marshmallow within the thin chocolate coating was nicely light and fluffy with a faint vanilla taste.? Unfortunately, that alone wasn?t enough to redeem this bar for me. An O for the Rocky Road. It was an excellent concept that could have been improved by using a stronger nut instead of cashews to add some oomph. Maybe roasted almonds would have been nice? In its current incarnation, I found it to be rather uninspiring.