Here in the U.S., the Kit Kat is manufactured under Hershey’s. Elsewhere in the world, Kit Kat is made by Nestle. My Kit Kat Hazelnut Cream was given to me by my friend Katie, who bought it for me while in Egypt last Christmas, so it’s made by Nestle. And because it’s probably manufactured in the U.K., I’ve filed is as European rather than African.

The Hazelnut Cream is a Kit Kat of the Big Kat (in the U.S.) or Chunky (everywhere else) variety. That is, rather than being four small “fingers,” it’s one giant stick. The chocolate around the wafers is extremely thick. In fact, there’s about as much chocolate as there is wafer. I found the milk chocolate to be creamy and sweet without being cloying, unlike the Hershey’s Kit Kats you can buy here. For mass-produced candy bar chocolate, it was pretty nice. 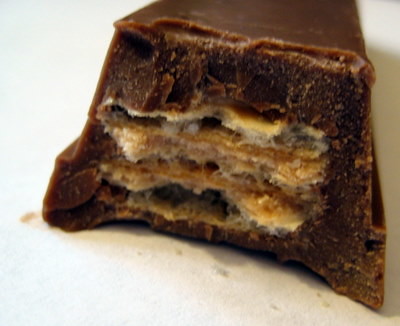 Despite it’s name, there was little hazelnut or cream to this bar. It had a sweet nutty tinge that’s far from the in-your-face hazelnut approach taken by Ferrerro. The light nuttiness served the bar well, but there was still room for more hazelnut taste to come through. 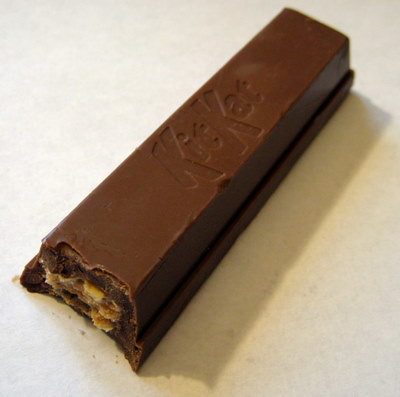 I personally don’t like the Chunky/Big Kat bars because I think they’re too big and hard to chomp down on. This would be wonderful in the smaller, standard Kit Kat form, I think. The hazelnut flavor could stand up better with less chocolate to overshadow it. An OM from me.