Is there anyone who doesn’t like s’mores? To me, there are few things better than this simple treat of gooey marshmallow, crunchy graham cracker, and sweet, melted chocolate. It’s oozy, it’s sticky, it’s messy, and it’s delicious.

Because I love s’mores, I was super excited to try Sweet Sweet Confections’ s’mores bars that the company sent. Handmade graham crackers and marshmallows dipped in chocolate? What’s not to love? 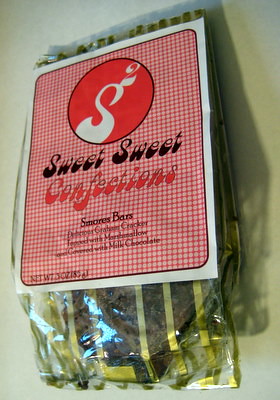 While the idea is great, I’m afraid I found fault with Sweet Sweet Confections’ execution of their concept.

For starters, the packaging does not hold up well. While the bars look gorgeous on their website, they arrived all smushed together, even in their padded mailer. I should note that these bars were first mailed to a Well Fed editor, who then mailed them to me. However, Dom on Chocablog had the same issue, and Michelle on Candy Addict’s photo also looks nothing like the advertised version. I think these bars need something a little sturdier than a cellophane bag. When I tried to open it at the top, the whole bag split apart, like cellophane is wont to do, which was super annoying, as it meant I no longer had a bag to keep the bars in. 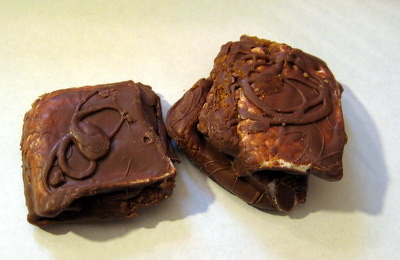 The bars themselves are slightly smaller than credit card-sized. Taste-wise, they were good but not great. I expected the graham cracker to be crunchy like, well, a graham cracker. Instead it was soft and crumbly, like a cookie or a really dense cake. While I prefer a more cinnamon/honey tinge to my graham crackers, I enjoyed the graham “cracker” layer. The chocolate coating was good and smelled incredibly chocolatey. It wasn’t high end chocolate or anything like that, but it was real chocolate, and it did it’s job. My biggest beef was with the marshmallow. Marshmallows should be either fluffy and soft or oozy and sticky, not dense and chewy. While eating this bar was far cleaner than eating a real s’more, the marshmallow’s texture just left something lacking.

I was impressed by the ingredients of the s’mores bar. With the exception of invertase as the final chocolate ingredient, I can pronounce and identify everything that went into these bars. I definitely believe that they’re handmade since the ingredient list is so preservative and additive free. 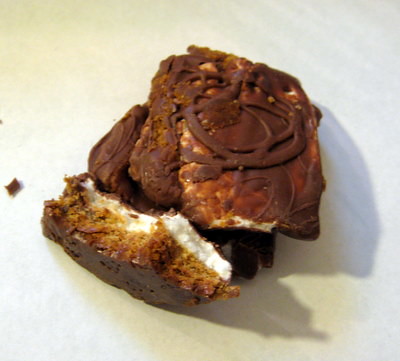 I found these bars to be good, but I wouldn’t pay $4 for the pouch of three. The different flavors and textures balanced well, but the bars were a little too sweet (though my tastes skew towards the dark chocolate end). A couple of my friends tried the bars and really liked them, but they also agreed that $4 for three bars was too much. If the bars were a little more high end – nicer packaging, nicer presentation, and better chocolate – they would be worth shelling out even more than $4 for because they could then be billed as a gourmet treat. In the state that the s’mores bars currently are in, I’d rather spend my $4 on a bag of marshmallows, a box of graham crackers, and a nice bar of dark chocolate and make my own s’mores. Only an O, I’m afraid.