Happy Halloween! I hope Sandy hasn’t ruined it for y’all or knocked out your power.

This Sirius chocolate bar was another gift from my friends Nate and Jane, who mailed me some Icelandic candy after they got back from their awesome Icelandic honeymoon.

The wrapper was matte instead of shiny, which made the bar seem classier somehow. The back ingredients flap translated it as “milk chocolate with orange flavour.”

This bar was lightly scored into squares etched with squares with Sirius in the center, giving it a picture frame effect. The milk chocolate was soft but had a solid chew that gave way to a creamy melt.

The orange flavor in the bar was subtle and sort of spicy, more like dried orange peels than orange oil, and it lingered in the finish. It was much less in-your-face and less cloying than Terry’s version of chocolate and orange, which I appreciated. 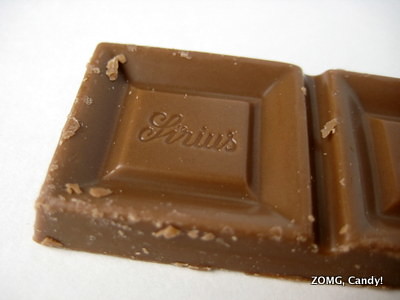 The bar was well-balanced and quite tasty, but though I enjoyed it, I don’t like the combination of chocolate and orange enough to want it again. An O.