Last Friday, I reviewed the Limited Edition Ritter Sport Raspberry and Cranberry Yogurt, one of the 4 Ritter Sport samples that I got from Euro-American Brands at Sweets and Snacks. This week, I’ll cover the other three, for a delicious Ritter Sporty week! 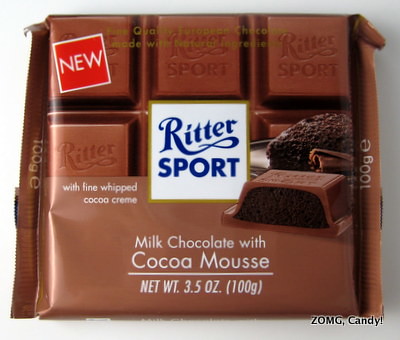 First up, the Milk Chocolate with Cocoa Mousse, a new Ritter bar that I’m hoping will work its way into permanent U.S. distribution. It was revolutionary because, unlike the regular 16 square Ritter, it took the same total area and subdivided it into 9 larger squares. 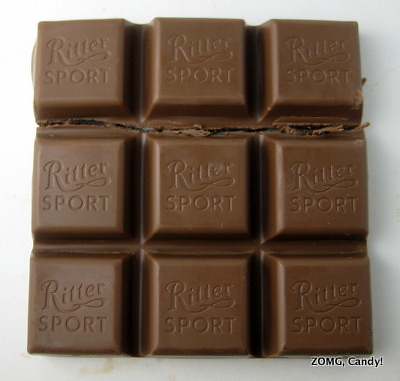 That change was made to leave the cocoa mousse, or “fine whipped cocoa creme”, more room to be fluffy. As you can see, the inside of each of 9 squares was filled with a dark chocolate filling. It made for a lovely visual contrast against the lighter brown of the milk chocolate shell. 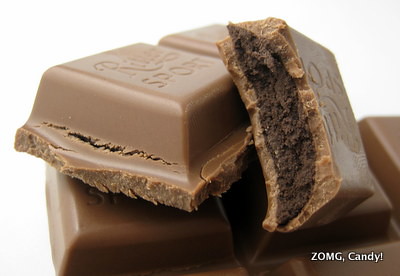 The cocoa mousse filling wasn’t noticeably fluffy in the same way that real mousse is, but it was definitely not solid. Instead, it was something in between the two – more airy than solid chocolate but firmer than real mousse.

The milk chocolate shell was thick and creamy with a caramelly sweetness. The cocoa mousse in the center had an incredibly deep cocoa intensity. It tasted fudgey with a bittersweet edge. 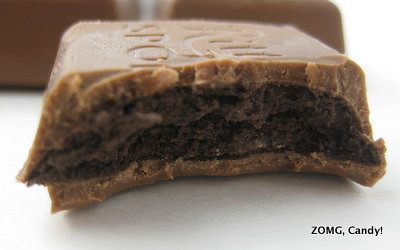 I absolutely adored the incredible chocolate intensity of this bar. It’s a shame that it had 9 squares instead of 16, as mine is now nearly half gone. A ZOMG!