The folks at Oh! Nuts were kind enough to send me a few bags of their bulk candy. They seem to specialize in event planning, as evidenced by their wedding candy section and their convenient candy by color section. But for me, it was their assorted malted milk balls that caught my eye. As I’ve noted before, I adore malt and malt candies.

Even though my shipment was completely free, it still arrived carefully packaged and in great shape. I was a bit concerned about them sitting around my apartment’s mailbox (indoors, but right by the front door) in the New Haven summer, but I needn’t have worried. The box was insulated with styrofoam and included several still cool gel packs. The candies arrived in Oh! Nuts branded resealable zip bags (greatly appreciated) with a content label on the back.

I specifically requested the pumpkin spice malted milk balls because I love pumpkin pie and pumpkin spiced things. In the fall, the Cheesecake Factory has a seasonal pumpkin cheese cake that I think is to die for, and I once made pumpkin oatmeal cookies that I couldn’t stop eating. So I had high hopes for these guys.

At room temperature, they were a bit of a letdown, as they tasted more of the spices (cinnamon, nutmeg, and ginger) that go into pumpkin pie than of pumpkin. They were good and texturally wonderful, with a light, malty, crispy center, but I wished for more pumpkin-ness. Then I had the good fortune to stick the remainder of my bag in the fridge. Once chilled, the spice flavor grew stronger, and a bit of pumpkinness came through, elevating these from an O to an OM. 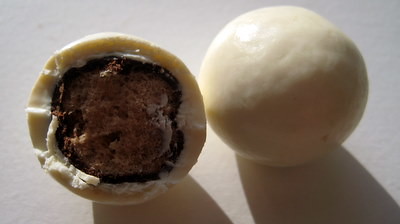 The coconut malted milk balls arrived without my specific request for them. I was a bit dubious about them, as I generally don’t like coconut flavored things. They tend to be too waxy and artificial tasting for my taste. I was also suspicious of the white coating, as I also tend to dislike white chocolate. The coconut malted milks balls, however, turned out to be divine, which just goes to show that you shouldn’t discriminate against candy by making generalizations (though I think I’m safe with saying I’ll never like black licorice).

Like the pumpkin spice malted milk balls, the coconut ones had crisp and crunchy centers. The coconut flavored coating didn’t taste fake like that of a Mounds bar. Instead, it was fresh and creamy and reminded me of the coconut milk I used to love to chug down until I learned that coconut milk is chock full of saturated fat. I could not stop popping these, so they get an OMG.

Both 1-pound bags of malted milk balls quickly disappeared into the bellies of the members of… the YPMB, but the coconut ones disappeared first (though to be fair, I did talk them up more than the pumpkin spice ones), making me wish I had set aside more for myself before I brought them out to share. Thanks, Oh! Nuts, for making me popular with my friends and keeping my band happily fed and entertained (they kept shouting “Oh! Nuts!”).