I recently spent several days visiting my boyfriend’s home in Boston. While I was there, his mother was kind enough to take me on an excursion to Nichols Candies, a homegrown chocolate store in Gloucester, Massachusetts. It reminded me a lot of See’s and Haven’s: solid and tasty, if not frou-frou fancy, treats made with care and at a reasonable price (around $18 a pound at Nichols, if I remember correctly). 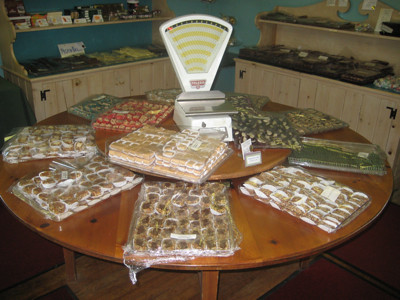 The store is filled with tables covered in trays and trays of a huge variety of chocolate treats. It was hard to pick just a few to try! I especially appreciated the creativity of their tulips, Brazil nuts wrapped in petals of caramel and dipped in chocolate. I didn’t actually buy any because I don’t particularly like Brazil nuts, but I thought I’d share the photo anyway. 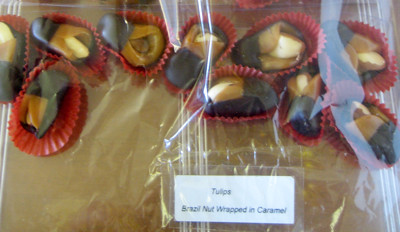 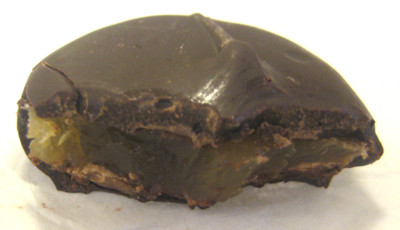 The dark ginger is a disk of crystallized ginger covered in dark chocolate. The flavor of the ginger was pretty mild, making it enjoyable for a ginger novice like myself. It’s got a tad more bite than ginger ale but falls far short of the pickled ginger that comes with sushi. The ginger’s texture is firm but toothy. The coating was on the sweet side for dark chocolate. It had a cocoa-y tinge with a nice snap and a thin melt. An OM for the fine balance of ginger bite and chocolate melt. 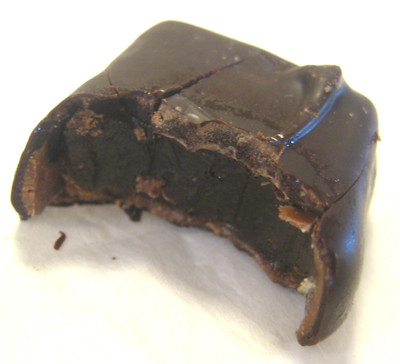 I was excited to try the pineapple jelly. I guessed that it would be pineapple fruit pate covered in dark chocolate, and it was, but only sort of, thus falling short of my expectations. The jelly was smooth with just enough gelatin to give it some texture, which was nice, but it lacked the graininess of true fruit pate. The flavor was lacking as well. Good fruit pate is vibrant and bursting with flavor. In this, I got no pineapple flavor, just a generic sweetness, so it gets an O. 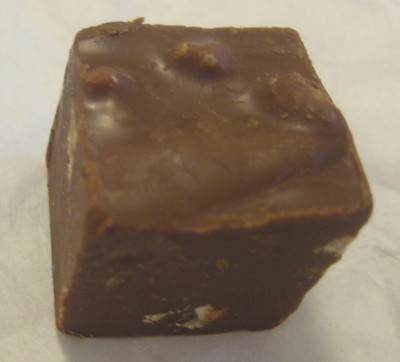 And finally, the much lauded walnut whip. It looked like a square of chocolate fudge with walnuts, but the texture was different. Instead of thick and grainy fudge, it was smooth, rich, creamy, fatty chocolate that melted thickly in the mouth. The chocolate had buttery caramel notes, and while the walnuts, being a mild nut, didn’t add much in terms of flavor, they did provide a bit of a textural contrast. I give it an OM, with the caveat that it’s too rich for frequent consumption. But that richness is what makes it so good!

Overall, Nichols is worth a visit if you’re passing by, and I’d happily stop there again to try more of their wide selection of chocolate goodies. And to stock up on their molasses chips (which get a biased ZOMG! because they’re one of my favorite candies).