Today’s post is super long, but hey, you’ve got the whole weekend to read it. I start with a mini wrap-up of my tour of Taza’s chocolate factory and finish with a review of their four Mexicano disks.

Coincidentally enough, on the day that my written-weeks-ahead news post about a virtual tour of Taza posted, I was taking my own in-person tour of the Taza factory. Aaron, their director of marketing, was kind enough to show my boyfriend and me the works while stuffing us full of yummy samples (dude’s also a whoa-legit foodie – he’s got a pig’s butchers’ guide tattooed on one arm and a carrot on the other). 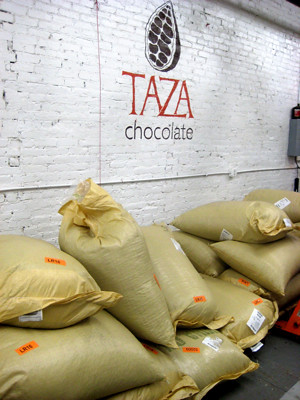 I already knew quite a bit about the company from their website and from the good publicity they’ve been getting, but Aaron still left me with plenty of additional tidbits. Their organic Domincan Republican beans are bought directly from the farmers at an above fair trade price, thus ensuring quality control while also helping their farmers maximize profits (similar to how Kallari runs things). The photo above is of their raw beans, waiting to be roasted in Taza’s retro-looking mid-century machines.

All of Taza’s ingredients are organic, and their vanilla pods and cinnamon sticks are also biodynamic. They buy their cane sugar from Green Cane, which uses the leftover cane fibers to power the cane sugar factory and the surrounding village.

Taza’s castoff cacao shells are used to flavor tea or beer or turned into compost. In a nice touch of cyclical, sustainable agriculture, the farmer who grows chilies for Taza uses their cocoa mulch fertilizer. Most of Taza’s employees bike to work, and they even bike their bars to local farmers’ markets in a specially outfitted tricycle from Mexico. Now that’s commitment to being eco-friendly! 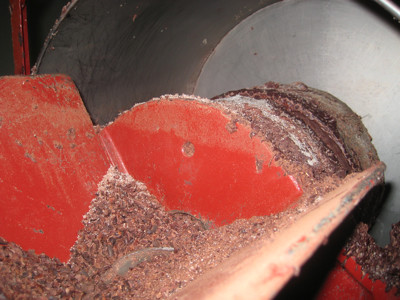 Taza chocolates are unique because their cacao is ground with two doughnut-shaped, hand-chiseled Mexican granite millstones called molinos (background of above photo, covered in ground cacao and cane sugar). They give Taza its unique, slightly gritty, natural-tasting texture.

Aaron guesstimated their chocolate to be around 80 microns. Most chocolatiers aim for about 20. The minimal processing really makes Taza’s flavors zing. Their chocolate is unmistakably bright and fruity, and you know you’re getting good quality stuff. 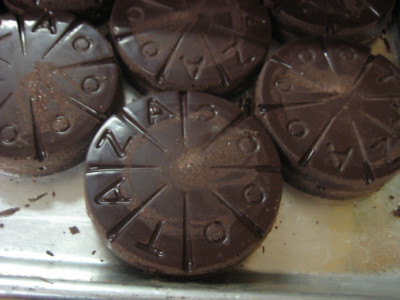 I’ve had three bars before in past tasting parties – they make 60%, 70%, and 80% bars – but I’d never seen their Mexicano disks before I visited their factory. They currently come in four flavors: cinnamon, Guajillo chili, salted almond, and vanilla. Each hand-wrapped 2.7 oz package contains two disks of 8 wedges each. 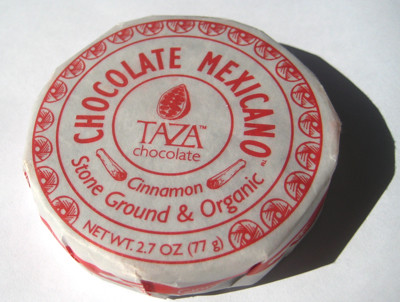 The Cinnamon Mexicano is made with real Ceylon cinnamon, not the Cassia stuff that most people keep in their pantries. Ceylon cinnamon is sweeter than Cassia, with a more delicate flavor that’s more reminiscent of cinnamon oil than what you’d sprinkle on your oatmeal. The difference is even noticeable in the smell of the Mexicano: it smells and tastes like chocolate and red hots.

The cinnamon flavor plays under the fruitiness of the chocolate. There’s a slightly bitter and astringent finish to the Taza that I countered by popping another wedge. For me, at least, this Mexicano needs a chaser, but I don’t mind. An OM. 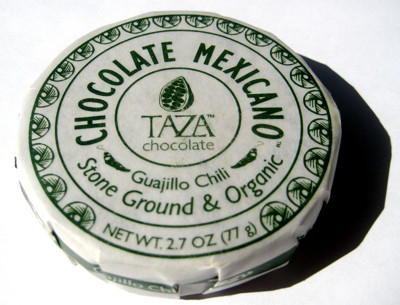 Taza’s Guajillo Chili is like chili chocolate to the umpteenth power. It initially tastes just like a standard Taza chocolate bar. Then woo baby! the burn comes through. It’s just on the bearable edge of tongue and throat burning pain. The tingle lingers for a bit, but it does subside on its own after a few seconds. It’s definitely not for the faint of tastebud, but I relished the taste experience. An OMG. 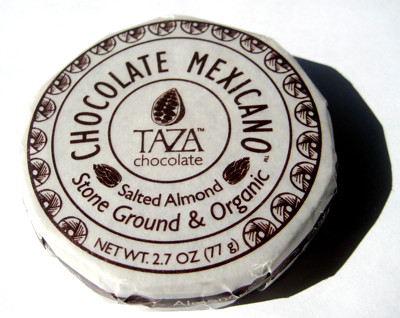 Salted Almond isn’t quite what you’d expect from a chocolate and nut bar. The roasted almonds (roasted in the same roaster used for the cacao beans) are ground right along with the cacao beans, so that the whole disk is evenly textured. I’m guessing the fatty nut addition is what makes this disk’s crumble a bit softer than that of the other Mexicanos. Unlike the previous two Mexicanos, organic cane sugar is the first ingredient listed, making the salted almond a bit sweeter than other Tazas. 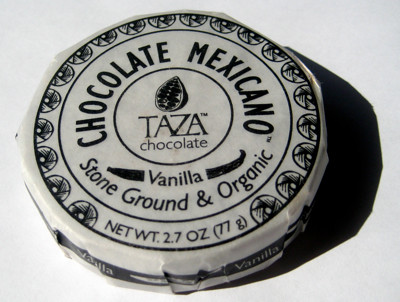 Vanilla also has cane sugar listed as the first ingredient, and it’s noticeably sweeter than all the other Mexicanos. That extra boost of sugar makes this taste especially round. The vanilla flavor comes through in the finish. Taza uses real vanilla beans, and the difference is definitely noticeable. If you’re used to vanilla extract and have never had the pleasure of smelling a real vanilla bean, you’re in for a treat. Another OM.

Taza is quite unlike anything out there in the U.S. chocolate market. Instead of showing off with flashy flavor combos and pretty designs, Taza impresses with high quality ingredients and a rustic feel that I adore. Lucky for y’all, they’re doing quite well and appearing in more and more stores across the country. And if you’re ever in the Boston area, swing by their factory, where you can buy their products at a price that’s lower than what you’d pay elsewhere.

According to Serious Eats, the Beatles were not Jelly Baby fans. I bought some Marks & Spencer's Jelly Babies last...