Thankfully, the Toffee Crisp was much better than its coffee counterpart. It’s very sweet milk chocolate with rice crisps and a ribbon of caramel. The chocolate is what I would call the standard British candy bar chocolate that’s sweet and lacking the sour tinge that Hershey’s has. The rice crisps are soft and are lighter and less dense than those of a Crunch bar – they reminded me of actual Rice Krispies in terms of their airiness – and they’re all mixed in with a chocolate cream so that the bar is soft and almost crumbly in a really nice way. This stands in contrast to the 100 Grand and the Nestle Lion, which both just cover their rice crisps in chocolate. 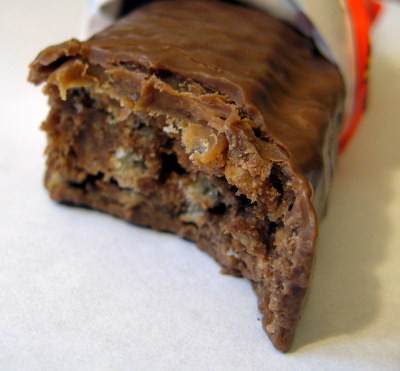 When I think toffee, I first think of the crunchy kind that you’d find in a 5th Avenue or Skor bar. I can accept that English toffee can refer to a soft type of caramel, but then I expect a darker caramel, maybe more molasses-flavored than sugary. The toffee of the Toffee Crisp was pretty standardly unremarkable. It’s nicely sweet but otherwise has no personality.

Overall, I give this bar an OM. It’s good, and I love the soft texture, but I liked the Lion better.