My father really wanted to go to the Grand Canyon while we were on the West Coast this past winter. I wasn’t a huge fan of losing two days of trip time driving to see a big hole in the ground, but at least I got a package of prickly pear candy from Desert Gatherings out of it. 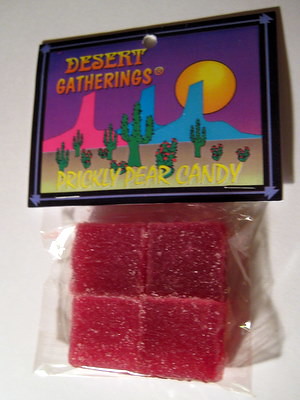 I couldn’t figure out how to precisely describe the taste of the prickly pear fruit. It’s lightly fruity, with a little bit of a berry quality to it. That makes sense, I guess, since prickly pear candy is made from prickly pear berries.

The candy was super sweet, but in a natural, fruity way rather than an artificial, gaggingly sweet manner. As good as it was, I believe it merits an O because once the novelty factor is gone, there’s really no reason to seek it out. I don’t see myself buying it again, but I wouldn’t turn it down if I were offered a piece.

One thought on “Prickly pear candy”