This was described as “cookie wafers, coconut caramel creme and chewy caramel, topped with toasted coconut.” Like the other two bars, this one was made with palm oil instead of cocoa butter, so no actual chocolate.

For some reason, the mockolate coating here held up much better instead of melting all over the place. Perhaps because it was lacking the other two’s airy crispies, this also got an additional adornment of caramel colored stripes on top. 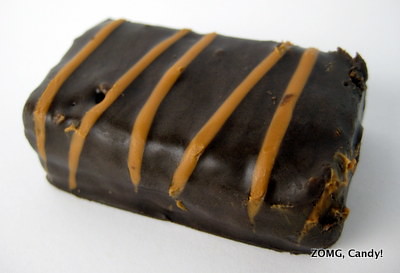 The wafer layers were quite crisp and tasted of toasty cookie and sweetened coconut flakes. They were topped with a noticeable layer of squishy and sweet caramel with bits of coconut in it that squeaked between my teeth.

I thought this bar did a great job of capturing the flavor of Samoas in chocolate bar form – sweet, amber caramel and light chocolate flavor plus coconut nuttiness. It was a little overly sweet for my taste, but I feel the same about Samoas. I think the mockolate is less of an issue here since its problem texture and flavor gets lost when mixed with the caramel. 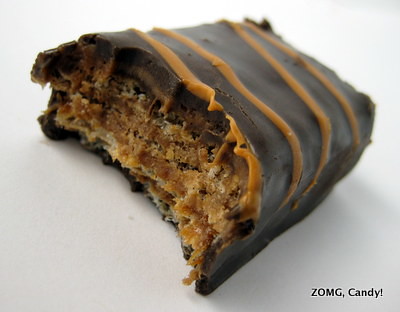 These are the only one of the three bars I’d want to eat again, but it skews a little too sweet and artificial to gain a boost in rating. Another O.