My friend, the newly minted Dr. Neil (congratulations, Neil!), is soon moving from Rochester to the Netherlands for a post-doc position. This makes me very sad because Neil is one of my favorite people, and I will miss him lots when he’s gone.

Neil is one of my favorite people because he’s now gone to the Netherlands twice, and both times, he brought me back Dutch candy. I should note that it’s not the candy-bringing itself that makes Neil endearing (I’d like to think that my affections are not so easily purchased); it’s that the candy-bringing is just one example of how Neil is a kind and thoughtful friend.

On his last trip, he brought me back a Nestle Bros bar. I had never heard of the Bros bar before and was initially confused at Neil’s email with the subject line, “Delivery” and the body, “Bros.” Was Neil going to bring me Dutch frat boys?

Nope. Turns out that the Bros bar is an aerated chocolate bar, pseudo-separated into six segments, each with a cute little bubble imprint on the top. 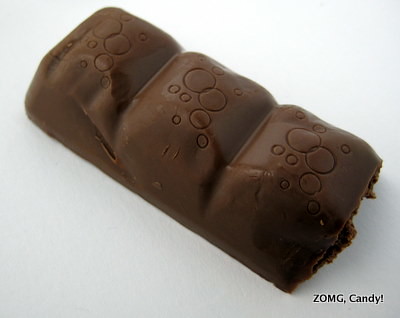 The wrapper touts the bars relatively low calorie count (131). This was both unsurprising – aerated chocolate is full of air, hence the lower caloric density – and surprising – low cal doesn’t quite fit my mental image of a Bro (FYI, Keystone Light is not actually lite). Though now that I think about it, I think the calorie count marking is just a difference in European nutrition/packaging laws.

The chocolate has a beautifully bubbled interior. I love the look of aerated chocolate so much! And I love the way it feels against the tongue, when the bubbles smoosh away and dissolve in the mouth. 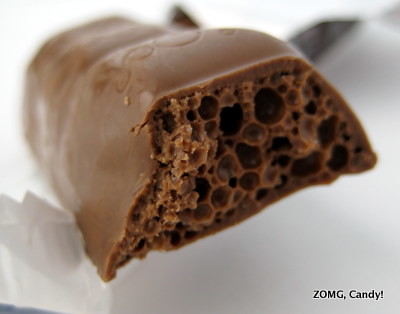 It tasted thick and sweet, brightly fruity, with dusky cocoa notes. I wouldn’t call it dark or milk; instead, it fits the semisweet bill. In fact, it reminded me of semisweet Nestle Tollhouse chips.

I managed to eat the whole thing in one sitting. Fortunately, the aerated factor meant that I felt no guilt for scarfing a whole candy bar in one quick go. An OM, and my repeated wish that aerated chocolate was more bountiful in the U.S.