Natasha’s Just Brittle is a homegrown brittle making operation based out of Baltimore, MD. They sent me samples of their cashew brittle, mixed nut brittle, and Cracker Jack brittle to review. 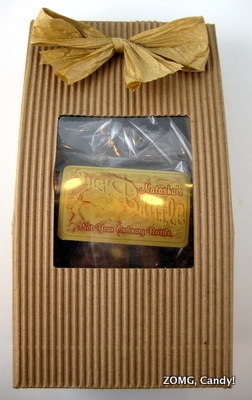 The brittle was attractively, rustically packaged in a corrugated cardboard bag. Each ~2″ x 1.5″ sample slab that I received was individually wrapped. I noticed that the brittle softened and took on moisture after just one day of being exposed to the air, so that packaging was a good idea. 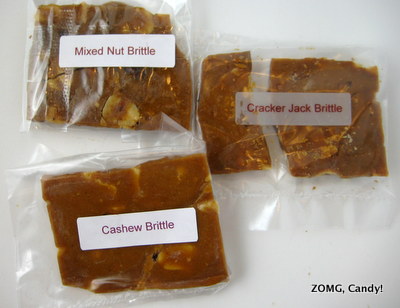 The brittles were buttery to the touch and snapped easily under my fingertips. When crunched with my teeth, it easily shattered before congealing into a tasty chunk of chewy burnt sugar in my molars. 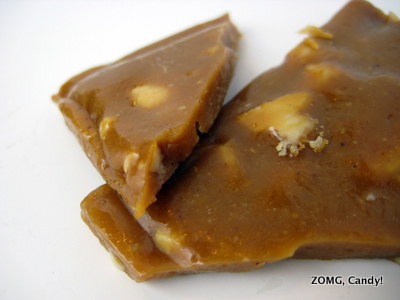 The cashew brittle was sweetly crunchy and nutty, then took on a too-strong saltiness that lingered in the finish and brought an almost sour tinge to the toffee of the brittle. I like cashews for their softer texture and more mild, clean nutty flavors, so I enjoyed this, aside from the saltiness. 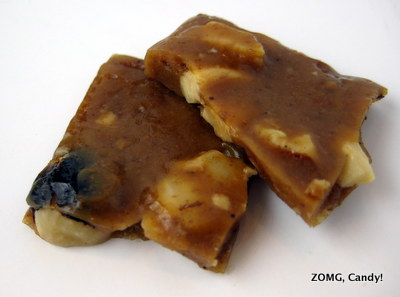 I have no idea what nuts went into the mixed nut brittle, but it tasted noticeably different from the cashew brittle. Its nuts’ flavors were more roasty with a tinge of acridness – much stronger nutty flavors than those of the cashew – underneath the  saltiness of the base brittle.

Cracker Jack brittle was my favorite of the three. It had chunks of caramelized popcorn and peanuts embedded into that sweet and salty brittle. 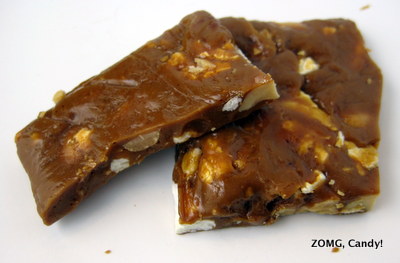 It tasted like Cracker Jack but with the ratios turned upside down so that caramel/cooked sugar was the dominant note, followed by nutty peanuts and toasted popcorn. Again, however, it was a tad too salty for my taste.

Natasha’s Just Brittle brags about how their basic recipe starts with sugar, butter, sea salt, and nuts. While I enjoyed their products, and the natural flavors of their ingredients do shine through, I felt that the sea salt was a little too heavily used.

Instead of finishing with clean brittle flavors, the brittles ended with a lingering saltiness that had me reaching for a glass of water to wash it away. An O.