I thought I’d follow up Wednesday’s review of Mars Planets with a review of Mars Revels, a similar UK offering. Revels are like the Planets in that they’re chocolate covered spheres (more or less) with various fillings. While Planets had nougat, fake malt, and caramel, the Revels are filled with caramel, raisin, orange, coffee, chocolate, and real malt. The malt ones are billed as Malteasers, so I knew I wouldn’t get duped with plain cookie again. 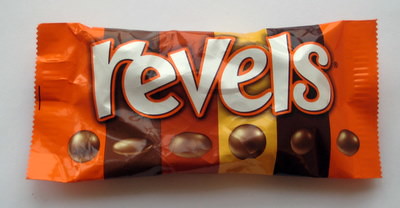 So how do the Revels fare in comparison to the Planets? As disappointing as I found the Planets, at least they weren’t as off-putting as Revels are. The Malteasers in the Revels are delightful – crisp, airy, and malty – but everything else gets a big thumbs down.

The chocolate Revels are fat little disks made of cloying chocolate. For some reason I can no longer remember, I also wrote “coal” down in my tasting notes. I don’t know why that’s there, but I can’t thing of any way the note “coal” can be taken positively. 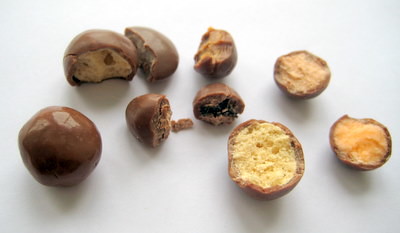 The orange and coffee ones were the same size and impossible to tell apart before tasting. They’re also hard to tell apart on sight from a cross section. I believe orange is the one in the bottom right corner, while coffee is immediately to its northwest. The inside of the orange Revel is unnaturally neon, while the coffee is strangely pale. The insides of both are powdery and grainy, and their tastes reflect their appearance. The orange is unnaturally artificial, and coffee is bland and fake.

Raisin, the smallest Revel, doesn’t taste of raisin at all. The poor quality chocolate overwhelms any fruitiness the raisin may have once had, and you can only tell it used to be a raisin based on its slightly pruny texture.

Chocablog gave Revels a positive review, though Dom is from the UK and grew up eating them. Terry from Chocolate Review writes about Revels latest Big Brother-related promotion to evict a flavor. I vote to keep the Malteaser, to replace the caramel with a chewy Planet, and overhaul the rest. A — plus a blech face from me. Like the Planets, a neat concept that was totally botched in the execution.

PS: Happy 08/08/08! My people, apparently, find the date to be auspicious. I’ll be trying to track down a television to watch the opening ceremony of the Beijing Olympics tonight.