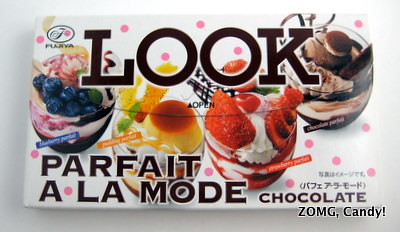 Like the Baskin Robbins Collaboration, the Parfait a la Mode was 12 little filled rectangles of chocolate. This time, the four flavors were Blueberry, Pudding, Strawberry, and Chocolate.

The structure of the fillings was different than that of the Baskin Robbins version. These were half-filled with a white cream, then topped with a contrasting flavor goo, except for the Chocolate parfait, where the topping was more solid. 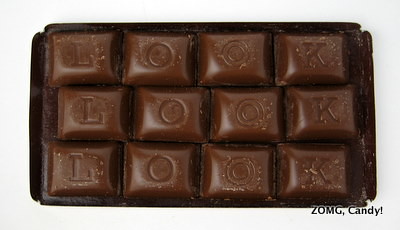 Blueberry was white with purple goo. It tasted darkly sweet at first before the bright fruitiness of jam came through.

Based on the picture on the box, I think Pudding was supposed to be flan flavored. It was white with a gold goo.

Pudding turned out to be my favorite of the bunch. At first, it tasted of just chocolate. Then the flavor of charred, just-shy-of-burnt caramel came through and lingered in the finish.

Strawberry had just a faint fruitiness and a mild, jammy finish. It was similar to the blueberry but more mellow and less flavorful.

Another O for the set. As a concept, Look has great potential for fun and versatility, but they really need to use better ingredients to win on the execution.

One thought on “Look – Parfait a la Mode”