I’ve previously written about Hershey’s Cacao Reserve line, their attempt to make better chocolate than their low quality, increasingly vegetable oil laced everyday fare. Their Single Origin Collection is a blatantly obvious but still smart attempt to jump on the single origin bandwagon. Like the word “Belgium,” the “single origin” moniker can lend cachet but doesn’t always deliver. Hershey’s, however, does a pretty nice job of making single origin chocolate accessible to the non-foodie snob. 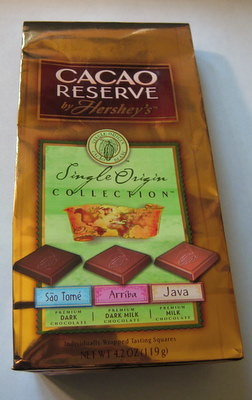 The collection contains three chocolates of three origins and three cacao percentages. There’s Java, which is a 37% milk, Arriba, a 50% billed as dark milk, and Sao Tome, a 70% dark. They come individually wrapped with cute little locale pictures and different colors depending on the percentage. And they were perfectly sized for a two-bite tasting.

The Java is a creamy milk chocolate with strong caramel undertones. It wasn’t as thick on the tongue as I would’ve expected a 37% to be, which left me slightly disappointed. Arriba also carries a creamy melt with an undertone that I had some trouble placing. I finally decided that it tasted like butter. 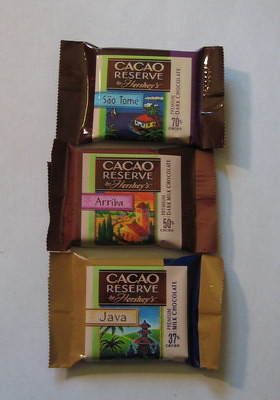 Unsurprisingly (because I prefer dark to milk chocolate), the Sao Tome was my favorite of the bunch. It had a super sharp snap to it, with strong cocoa notes and a slight sour berry fruitiness. While the Sao Tome made a nice impression, the overall collection isn’t that exciting, so it only gets an O.

You can taste some of the cacao nuances, but other, more expensive bars do that better. Still, it’s a great way to ease yourself into chocolate tasting and an affordable way to host a little chocolate tasting party. For that, Hershey’s gets an A for effort.