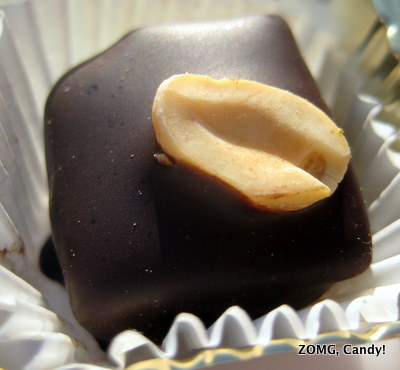 I actually reviewed the Peanut Butter Cayenne over 9 months ago when I first visited the shop, but I didn’t realize it until I sat down to write this review (apparently I’d also had some version of their Ginger Molasses from the Holiday Collection on my first visit). I’m glad to see that my peanut butter cayenne tasting notes held up (ginger molasses varied a bit).

Here’s the peanut butter cayenne description based on the notes I took this time around: This dark chocolate truffle smells strongly of peanut butter, and for good reason, as its filling is a dry and gritty peanut butter.

The cayenne is barely perceptible at first, just a hint of heat to the finish, but the burn builds and builds even after the chocolate is gone, which is a neat effect. The heat never gets overwhelming; a plus for me. 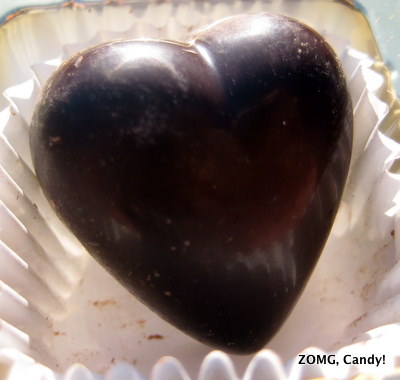 Rasberry Wasabi was a dark chocolate in a heart-shaped mold. It smells quite fruity. I can see actual raspberry seeds inside the filling, so it’s no wonder that the flavor is of genuine raspberry.

The wasabi component is barely there as a horseradish-y finish. I like its subtlety and novelty, as I’ve never seen this flavor combination before. 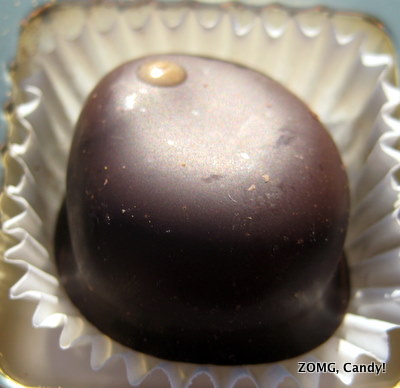 Orange Chipotle is identifiable by a little orange dot against its dark chocolate coating. It smells lightly of fruit, though I don’t quite get citrus from the scent.

It first tastes of chocolate and smokiness that gives way to a gentle hint of orange oil before the chipotle burn powers through and wallops your tastebuds. This one is not for the faint of tongue, and I found this truffle’s heat to be more painful than enjoyable. 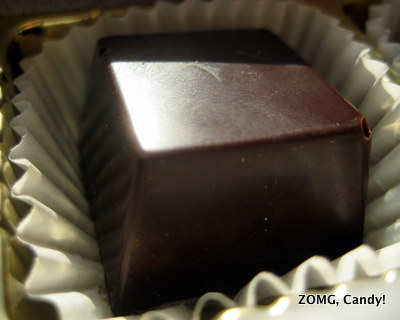 Lemon Pepper is a square dark chocolate shell with a white chocolate ganache. It tastes strongly of cracked black pepper with lemon undertones. The lemon and pepper pair nicely – they are, after all, a classic savory combination – but I didn’t care for how the duo went with chocolate. 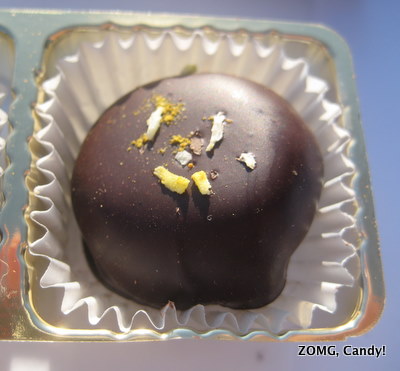 The Coconut Curry was a dark chocolate shell sprinkled with yellow curried and plain white shredded coconut, plus a dusting of yellow curry. Unsurprisingly enough, it smelled super strongly of curry/cumin. But SURPRISE! It looked like this inside: 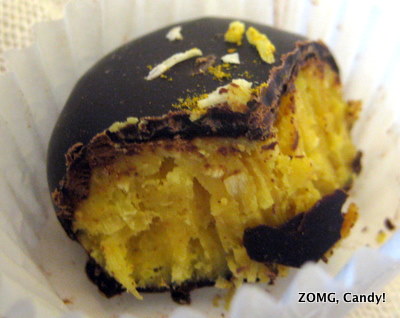 The bright yellow ganache was a bit of a shock. Mixed in were more bits of shredded coconut. The flavor profile begins with curry before the coconut flavor comes in. It’s actually a tad savory, despite the fact one would expect a chocolate truffle to be sweet. The inventive combination worked well for me.

Hedonist’s Spice Collection is full of creative flavor combinations. Coconut curry is a standout for its unusual nature and strikingness. I enjoyed the raspberry wasabi and peanut butter cayenne, while orange chipotle and lemon pepper weren’t to my tastes.

This collection would be a great gift for those with adventurous palates. As a whole, an OM. As stand-alones, peanut butter cayenne would get an extra G for its deliciousness, and coconut curry would merit that same bonus for sheer wow factor.