Remember when I complained about having to miss a free Hedonist chocolate tasting? My boyfriend and I ended up swapping our travel duties, and he came to Rochester instead of me going to New Haven, which meant we both got to go to the tasting party. Hooray! 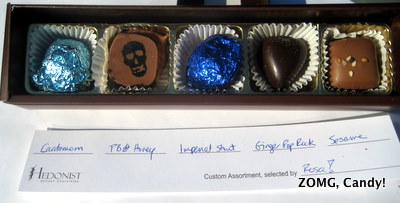 Cody came up with some great stuff – the cardamom was the stellar standout for me – and I made off with a goodie bag full of treats: a Rosa-selected box of 5 truffles (above) that I paid for (including another of Cody’s cardamom truffles), and free samples of their Autumn Truffle Collection, their milk chocolate sesame bark, and their pistachio ginger bark. 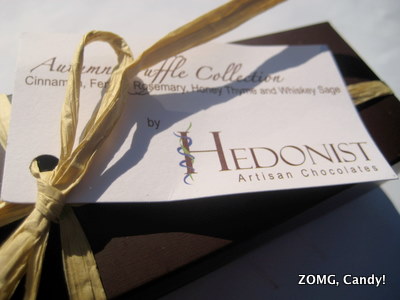 I love that Hedonist includes a customizeable guide with every box, to help you identify which is which. So much easier than trying to guess or cross-reference with the chocolatier’s website. 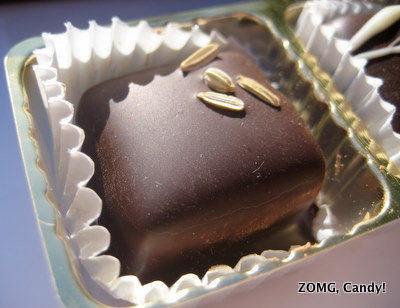 Fennel was easy to spot, as it was garnished with whole fennel seeds. Fennel goes quite well with the high quality, dusky dark chocolate (Valrhona, I think) even in its most potent, whole-seed state.

In the actual truffle, a dark chocolate shell around a white ganache, the fennel flavor is tempered, and it works even better, especially with the slight saltiness that Hedonist added. 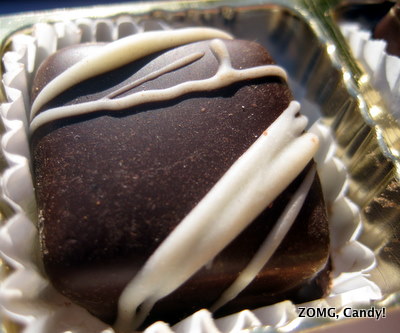 Whiskey sage smells a little boozy but in taste, the whiskey mostly manifests as a light sweetness. The most prominent flavor in the truffle is sage.

The herb and chocolate meld together beautifully. It tastes velvety, and it’s a unique flavor combination that melds beautifully. 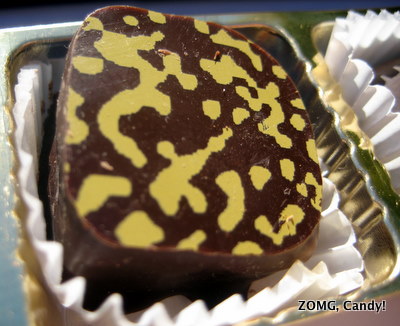 Honey thyme smells just like the jar of thyme in our spice rack. It tastes just like thyme too, with a dusky, dry cocoa finish. I can’t pick out honey flavors from the overall sweetness of the truffle, as the thyme has such a strong presence.

Again, the flavors go together well, but it makes me think of Italian food and pasta sauce when I eat it, and that’s cognitively jarring. I enjoyed it, but I don’t know if I would seek it out again. 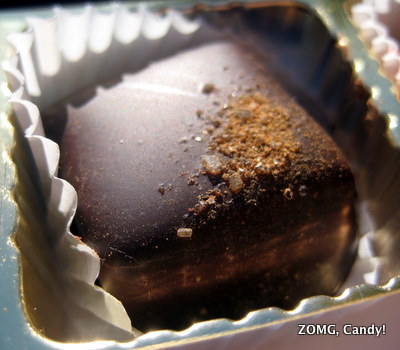 Cinnamon, understandably enough, smells just like fresh ground cinnamon. I think it’s Ceylon rather than your more run-of-the-mill Cassia, as the cinnamon tastes delicate and maybe slightly sweet. Its presence is super strong in the truffle, so much so that it becomes slightly astringent. It definitely seeks a different target palate than Cinnamon Toast Crunch (which I love, too, by the way). 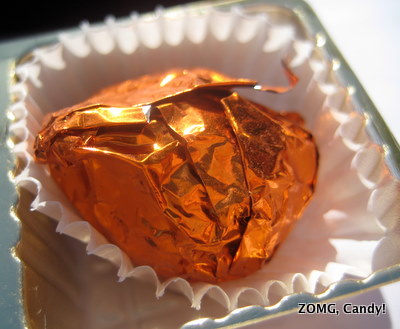 Rosemary was a rolled rather than a molded truffle and came wrapped in cheery orange foil. I didn’t get an unwrapped picture of this one, specifically, but it looked like this (actually Hedonist’s Imperial Stout, another rolled truffle), all charmingly lumpy and dusted with unsweetened cocoa powder. 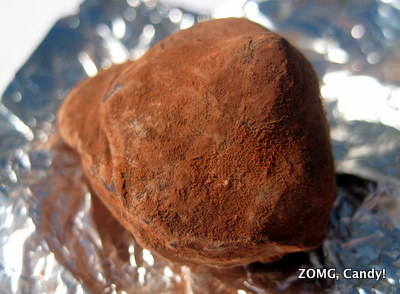 Again, it smells and tastes of my spice rack. The ganache inside is rich and fattily cool on the tongue. I know “fattily cool” doesn’t exactly sound appetizing, but it’s a good sensation!

Hedonist’s Autumn collection of savory spice + dark chocolate is definitely a winner. Their flavor combinations were novel (well, cinnamon and chocolate is relatively common, but not the way Hedonist made them) and despite their… unintuitiveness… worked together quite well, making this an intriguing and delicious set.

Whiskey sage was my favorite, and even my least favorite (the honey thyme) was tasty – it just messed with my mind a little too much. It makes me want to whip up a pan of chocolate bark and sprinkle the contents of my spice rack over it to see if I can find chocolate magic too. An OMG for the collection as a whole, with whiskey sage meriting that extra Z.

If you want to try them out for yourselves, remember that they’re offering free shipping until the end of the month!