Hedonist gave me this bag of milk chocolate sesame bark as a free sample, along with their current Autumn Truffle Collection that I reviewed on Wednesday. I had seen their bags of bark in their shop before, but I’d always dismissed them as being not nearly as exciting as their truffles. Boy was I wrong! 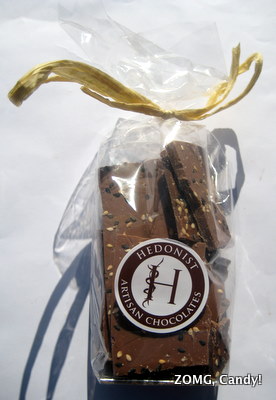 If I remember/heard her correctly, when Zahra at Hedonist packed this sample for me, she told me it was their best seller. At the time, I found that a bit odd, as milk chocolate sesame bark doesn’t sound like it should be a best seller – it’s an unusual flavor combination that I’d never heard of before, and I’d expect best sellers to be more generic in order to be crowd pleasing.

And then I promptly forgot about that oddness, as I was distracted by trying to pick out a variety box of truffles for myself.

On the surface, this just looks like milk chocolate slabs floating white and black sesame seeds. Once I opened the bag, however, I realized that it was much more. 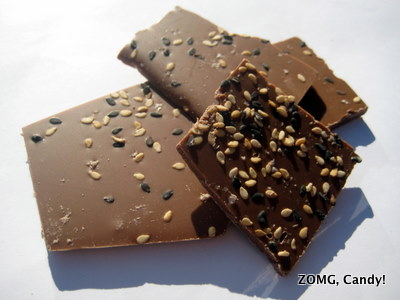 For starters, it smells strongly of sesame oil. I actually first thought it was soy sauce because soy sauce and sesame oil are often used together in Asian cooking, so I guess my scent memories/references got crossed.

Tastewise, there’s a noticeable saltiness to the bark that’s the first flavor to hit the palate. It’s not always evenly distributed; some bites were saltier than others, though none were unpleasantly so. I actually enjoyed the occasional changes in saltiness, as it perked up the palate.

Immediately after the saltiness comes a rush of sesame oil flavor. It’s super aromatic – that’s the best word I can find to describe it. Finally, you get a roasty, nutty sesame seed bite every time you hit a seed, which is fairly often, as you can see. 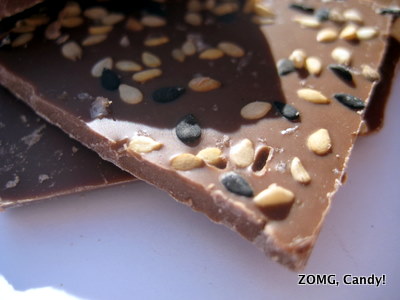 The milk chocolate is a bit player in this, as the bark mostly tastes of sesame oil, but it does add a sweet, thick melt, a slight dusky flavor, and a touch of fruitiness to the finish.

All in all, Hedonist’s milk chocolate sesame bark is an amazing, complex, who would’ve-thunk-it-would-work flavor combination. It’s not the most delicious chocolate that I’ve ever had (though it is delicious), but it does have an extra intrigue factor that puzzles the tastebuds and kept me reaching for more. And more. And more. A hearty OMG.