I bought this Hammond’s Pigs N’ Taters bar at the amazing Giant Eagle flagship in Pittsburgh. How could I not buy a bar featuring “milk chocolate with crispy bacon bits & potato chips”? Those are all things that I love!

This is the third Hammond’s chocolate bar that I’ve reviewed (previous reviews here and here). While they look like they’re all the same rectangular shape on the outside, they’ve all had a different structure inside. This one was segmented into 6 rectangles, each stamped with an H.

The bar’s break was soft, due to the milk chocolate. That milk chocolate was sweet with a mild chocolate flavor. It was maybe a bit sour and dusky to finish, but it was hard to tell because…

SALT! was mostly what my tastebuds picked up. I like salt in my chocolate, but man, this was salt overload. The potato chips were salty, as were the bacon bits (which were the crunchy artificial kind with no actual meat).

All those salty add-ins did bring a nice crunch to the bar. If I thought really hard about it, I think I could pick up some vaguely meaty and starchy potato notes, but mostly it was just salty. 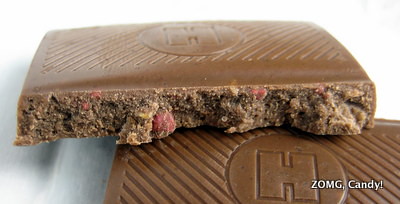 It turns out that mixing up a whole bunch of things that I enjoy doesn’t necessarily compound that enjoyment. Go figure.

An O because I did enjoy trying it, but I wouldn’t buy it again now that my curiosity is sated/salted.