A labmate went home to China to celebrate the New Year and brought back a lot of candy to share. I asked her to select some for me. Here were my impressions. 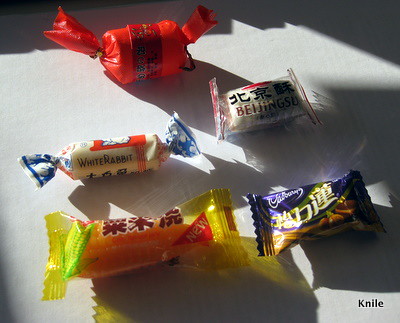 (NB: I originally thought the picture on the wrapper was of chestnuts. It’s definitely of hazelnuts. This knowledge makes the review funny-ha-ha-Neil-can’t-recognize-nuts as opposed to just funny-ha-ha.)

The Cadbury Chestnut, as I think of it, was the one most similar to candies I’m familiar with. It presents as a brown nugget that could be mistaken for butterscotch or milk chocolate.

Biting it in half yields a few drops of a sweet sticky liquid in the center of a chewy, but not impossible, bulk. It required a fraction of the chomps that the White Rabbit did. 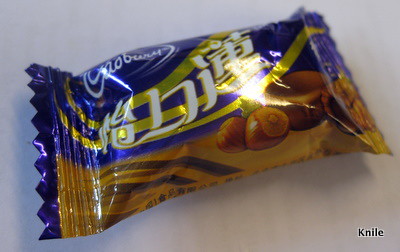 Here, I have to admit that I’m unsure what chestnuts in their natural state taste like. Come to think of it, I don’t know if I’ve had them roasted over an open fire either. This had “peanut butter” written all over it for my naive taste buds, which have surely been abused by an overconsumption of capsaicin and hops. 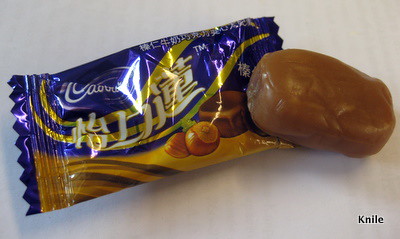 I would have liked a bit more liquid than solid, but given that the liquid was a surprise, the manufacturers have probably made the right choice when it comes to making a mess of customers’ chins, hands, and sweaters. This is definitely another OM for me.