I picked up a quartet of French Broad Chocolates while I was at A Southern Season. They got a special mention at the chocolate counter because they were local. In fact, they were only local-ish, as their Asheville store is about 4 hours from Chapel Hill. 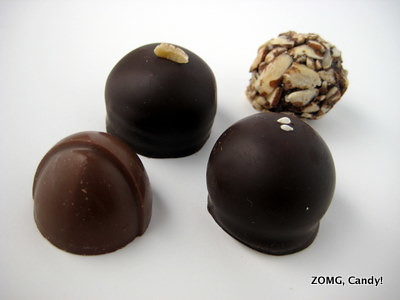 Though A Southern Season carried many different French Broad Chocolates, I limited my purchase to just 4. They were $2.50 apiece, and I had to limit my spending since I’d already decided to splurge on Recchiuti.

I got a vanilla bourbon, mole negro, fig and port, and sorghum molasses. I’ll review the first two today and save the next two for Wednesday. 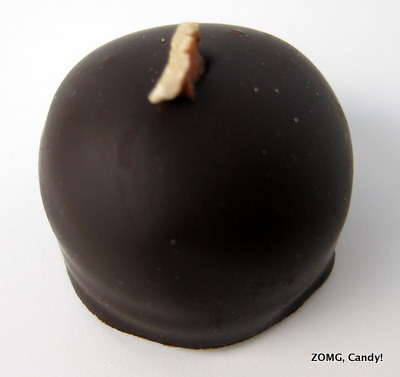 Vanilla bourbon, as described by the website: “In this dark chocolate truffle, we use Knob Creek, our favorite small batch straight bourbon whiskey from Kentucky, and chase it with organic vanilla bean. They are dipped in dark chocolate and topped with toasted Missouri sweet pecan.”

This dipped truffle smelled quite sweet. Its base was a solid dark chocolate that, alone, tasted bright and a tad sour with a slightly too sweet finish. 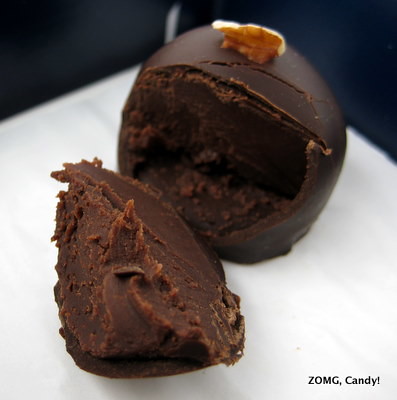 Its ganache center was creamy with a cool melt. It packed a sweet boozy punch, with all the flavor of bourbon but none of the alcoholic burn, which I appreciated. I didn’t get any vanilla notes, which were probably dominated by that bourbon.

Mole negro was described as, “a panoply of chiles, nuts, seeds and spices [that] are dark-roasted. Soaked and ground, the resulting paste is added to a dark chocolate ganache for a one-of-a-kind truffle.” 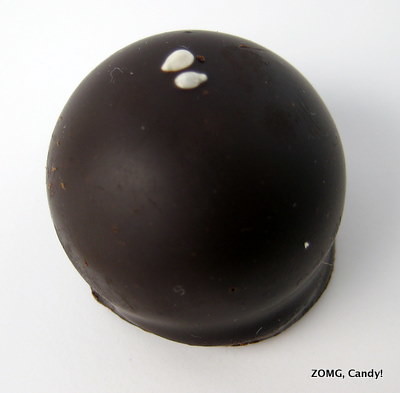 It was also a dipped truffle, and it smelled of cinnamon. One bite brought a serious punch of a complex spice mixture. It left a firey tingle in the back of my throat that dissipated after a few seconds.

I caught cinnamon, chile, and maybe cumin? There were probably other spice and flavor goodies that I didn’t pick up on or couldn’t identify. 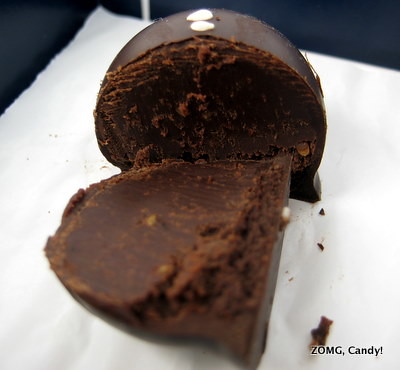 A light grit from the spices was left in my mouth after the chocolate melted away. I wish they’d used the spices to infuse cream and then strained them out before making the ganache. Spice bit leftovers are unpleasant on the tongue and add astringency.

I appreciated the unique taste experience of the mole negro truffle, but it was not one I’d like to repeat. The vanilla bourbon was nice, and I’d eat it again if it were offered to me, but I wouldn’t buy it again at its price point. Both get Os.