Back in March, over my spring break, I road-tripped to Chicago with my dear friends Katie, Chris, Rita, and Steve (who needs to get a blog or something. I’m not going to be creepy and link to his facebook page). Lemme tell ya, you’ve got to really love the people you’re road-tripping with, especially when you’ve decided to make a 17/18-hour drive in one day, and you’re driving a tiny little sedan that doesn’t comfortably fit 5. Chicago was our destination because that’s where Katie is from, and her parents were kind enough to take us in for a week. And they were kind enough to buy me candy, including a delicious box of Frango mints (I repaid the favor by buying them some chocolates at Haven’s… except Katie forgot to bring them with her when she flew home for Cubs opening day, so I still owe them one). 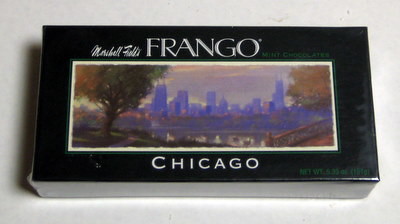 Frango mints have a storied Chicago history and are a sore subject for some Chicago natives who resent that Marshall Field’s was bought out by Macy’s. Chicagoans are quite proud of their city, and they should be if they are the home to these delicious chocolate mints. 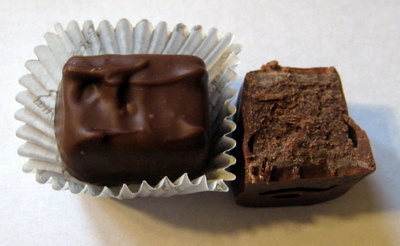 I expected the Frangos to be like Andes mints or little peppermint patties or something. Instead, they’re chocolate all the way through. Rich, thick, creamy (like a thick, melt in your mouth ganache), dense, sinfully indulgent chocolate with a light smokiness and a great finish. The mint flavoring is just right; not too overpowering, but strong enough to assert its presence. 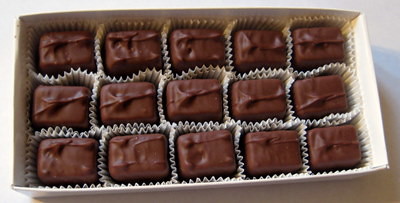 My 1/3 pound box had a generous 15 mints in it. I ate about a third of them and shared the rest, which were quickly gobbled up and praised by my friends. As I write this review and reminisce about the Frangos, I wish that I had kept them all to myself so that I could have another right now. Though, according to Cybele’s take on the dark version, they’re high in trans fat, so maybe it’s better that I spread the unhealthy deliciousness around. A solid ZOMG! Many thanks to the Cobb’s for introducing me to such a tastebud delight.