When I was a kid, I always associated Tolberone with glamor. I think it’s because they used to be mainly available in Duty Free stores, and I therefore associated them with glamorous international travel.

They’re quite widely available these days – I picked up this dark chocolate Tolberone at Wegmans, when I was grocery shopping – probably because they’re now distributed by Kraft. 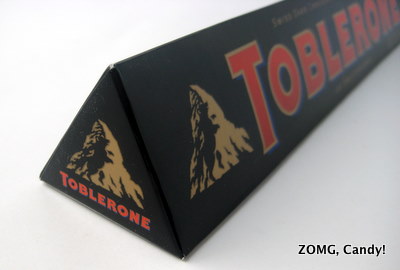 The box describes it as “Swiss dark chocolate with honey and almond nougat” (regular Toblerones are Swiss milk chocolate). It’s got a unique triangular shape broken into little mountain segments.

The segments are stamped with the Toblerone name and wrapped in a flimsy silver foil. I had a really hard time breaking them up. 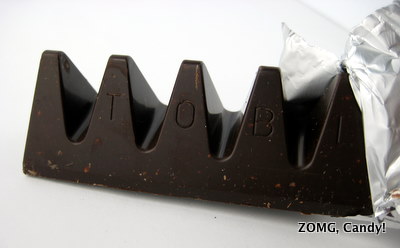 When I used my hands, I got chocolate smeared all over them because I had to grip the chocolate so hard. When I tried to bite off a segment, the peaks just hurt the roof of my mouth.

Taste-wise, though, I have no complaints. The dark chocolate was deep, with strong cocoa notes and a dark fruitiness. The finish was just shy of bitter – and that’s a good thing! It pushes the deepness of the cocoa but stops just shy of becoming unpleasant. 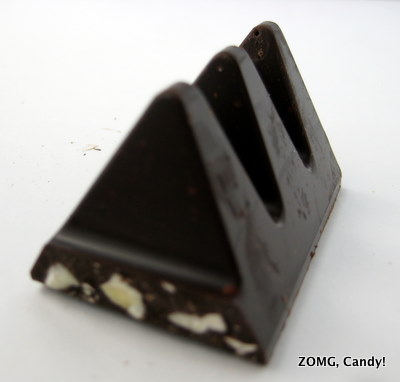 The bar was chock full of chunks of almond and bits of sweet, honey-flavored toffee. The almonds were crunchy and the toffee was crisp, and their texture contrasted nicely with the smooth, thick melt of the chocolate.

There’s a reason why Toblerone is a classic – they know what they’re doing, and they do it well! If only the mountains were a tad easier to cleave… An OM.

P.S. Did you know that there’s a bear hiding in the Toblerone mountain? Give it another look!