Red Vines were not a childhood candy of mine. In fact, I never heard of them until they were proclaimed “crazy delicious” in The Chronic(WHAT?)Cles of Narnia (tangent: man, rewatching that takes me back to my freshman year of college, back when YouTube was new and video shorts were novel).

I recently got the chance to try Grape Vines, the grape-flavored corollary to Red Vines (another tangent: does that mean Red Vines are red-flavored? Wikipedia is vague about exactly what the flavor is), via some free samples.

The most notable thing about the Grape Vines was their smell. It was strong! And wonderfully artificially grape-y, like popsicles.

The vines were striated and spiraling, with a deep purple stain. They were stiff yet pliable and totally tie-in-a-knot-able. 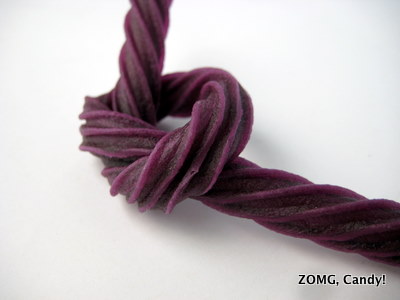 Taste-wise, they were less exciting. They were chewy and wheaty and a little plasticky, and, alas, they didn’t taste nearly as good as they smelled.

I found them devoid of grape flavors. Instead, they had a generic sweetness that wasn’t unpleasant but also wasn’t that exciting. 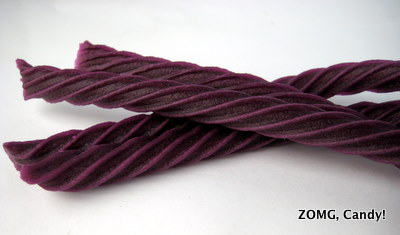 In the end, they were pretty innocuous. I put them out at work, and on one occasion, I found myself grabbing one because it looked and smelled so tempting. But then after eating an inch, I felt no need to finish my vine and tossed the rest.

An O. If you’re a Red Vine fan, you’d probably enjoy these, and they may make for good mindless snacking. They were too devoid of flavor to me. Cybele reviewed them and gave them a benign rating.