My friends Nana and Justin have been living and teaching English in Korea for I think a year and a half now? I’ve been following their adventures in Asia through their blog, in which they’ve done a great job of chronicling the different cuisines they’ve had the opportunity to try. They also ran a few features involving themselves drinking weird stuff. They were kind enough to send me a package of candy, and though there were no weird drinks, there was the weirdly named “Crunch Ball Crispy Candy.” 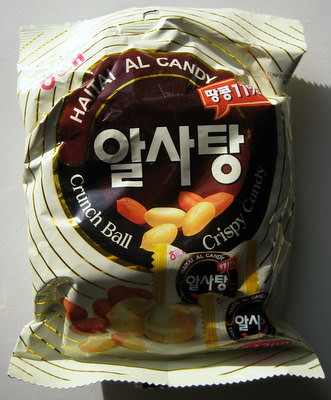 Methinks the name lost something in translation. The bag made the candy look like peanut flavored hard candy. The crunch part could refer to the hard candy, and the ball clearly refers to the shape… but what makes it crispy? I usually associate crispy with chips and fried things, not candy. Hmm… 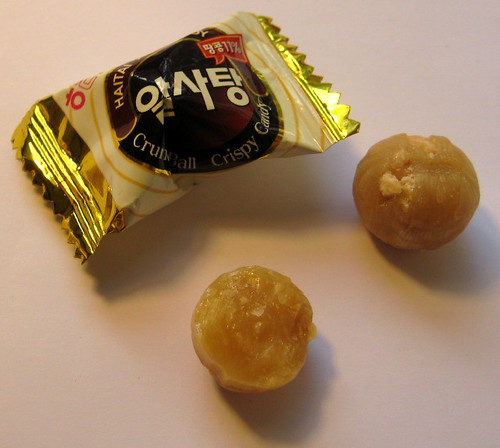 It turns out that these candies are basically little balls of peanut brittle. Heavy on the brittle, light on the peanut, which is great for me, as I hate getting bits of peanuts stuck in my teeth (which is also why I’m not a big fan of nuts in candy in general). They cleave just like traditional brittle does, and like traditional brittle, it sort of gets packed in the molars. The peanut bits are pretty small, but they definitely bring their nuttiness to the ball. The prominence of the brittle makes these fairly sweet but not so sweet that I couldn’t eat more than one in a row.

The peanut bits are pretty small, but they definitely bring their nuttiness to the ball. The prominence of the brittle makes these fairly sweet but not so sweet that I couldn’t eat more than one in a row.

Flavorwise, texture-wise and convenience-wise, these guys are great. Crunch Ball Crispy Candy gets an OMG from me. I still think I like the Crunky Nude Ball candy they gave me the best though. Thanks again, Nana and Justin!