Nestle‘s Cranberry Raisinets have been making the rounds in the candy review blogosphere lately (check out Candy Blog and Candy Addict). A PR rep sent me some free samples, three 100-calorie packs, to be precise, along with an offer that I think you, dear readers, will appreciate. But we’ll get into that in a bit.

Calling them Cranberry Raisinets seems almost nonsensical, but I can think of linked two reasons why they’re named what they are. Calling them Craisinets would probably lead to all kinds of naming rights battles with Ocean Spray (makers of Craisins), and calling them anything else would lose the brand recognition that Raisinets brings.

That’s why we get so many variations on a theme in the candy world (and the marketing world, really); it’s far more difficult and expensive to launch a new product than it is to tag it onto an existing brand. 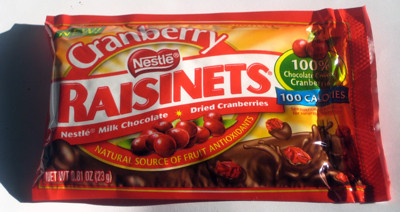 Still, I’m not sure exactly how much cachet the Raisinets name brings. I see Raisinets as kind of innocuous candy. Instead of being a love/hate thing, they’re more of a love/would rather eat something else thing.

I remember being a kid and trying to pick around the chocolate-covered raisins in bridge mix and feeling vaguely duped each time I mistook one for a chocolate covered peanut. For me, standard Rasinets are something I don’t buy for myself but that I don’t refuse when offered to me. I also feel the same way about raisins, by the way. 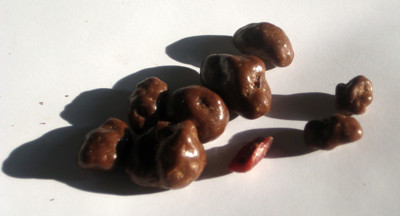 Each 100 calorie pack holds a respectably substantial amount of candy (i.e. much more than is shown in the above photo), and each Cranberry Raisinet has a relatively substantial layer of milk chocolate. It’s super thick and tongue coatingly heavy, which is pleasant, though the chocolate itself is rather one note. I thought it had a lightly sweet berry finish, but that may have been the cranberry rubbing off.

As for the cranberry inside, they were sweetly sour, which makes sense, as they’re sweetened dried cranberries. I would’ve preferred an unsweetened cranberry, as I bet a tarter tang would stand out against the heavy chocolate more (I had the same issue with Emily’s dark chocolate covered cranberries), but that would probably have less mass market appeal.

All in all, I find these an improvement on the Raisinet, thanks to their barely perceptible hint of sour. I prefer Emily’s because they use dark chocolate, but Emily’s is harder to find.

I’m torn whether to give these an O or an OM. While I wouldn’t buy them for candy savoring, I think these would really hit the spot at the movies as a decent, not too bad for you, munchable treat. But I never buy candy at the movies (too overpriced), so an O it is. But a good one!

And now, dear readers, the fun reward part for making it through the review. Nestle’s PR peeps have offered to run a giveaway through ZOMG, Candy! Five randomly selected winners will receive their own Cranberry Raisinet samples. To enter, leave a comment with a working email address and your thoughts on Raisinets or movie theater candy by noon EST on Wednesday, August 5th. U.S. readers only, please, as international shipping is pricey!