Is there anyone who’s immune to the smell of Cinnabon? Something about the mix of sugar and cinnamon and heat is so intoxicating! I’ve never let myself succumb to the siren scent of Cinnabon (too many calories from “frat”!), so I was excited to taste these Cinnamon Bun Bites as a less calorie laden alternative.

I got them as a free sample from the Cookie Dough Bites folks at Sweets and Snacks. They were also showing off their Hello Kitty and Care Bear branded boxes of their other treats, but these Cinnamon Bun Bites were too new to warrant the licensed character treatment. 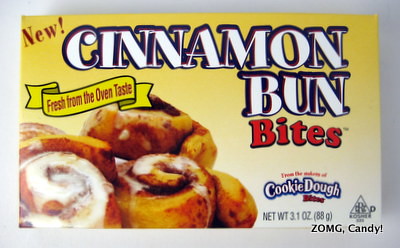 They turned out to be little spherical nuggets of cinnamon scented “dough” that were covered in a white confectionary coating. That coating was a bit greasy, probably thanks to the palm oil that went into it. It tasted sweet and creamy, like icing. 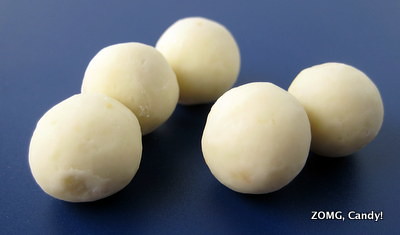 The doughy center carried all of the cinnamon flavor. It started off cinnamon-y and finished with a toastiness that was reminiscent of golden-brown baked goods. The texture reminded me of peanut butter cookie dough, with a soft yet solid pasty graininess. 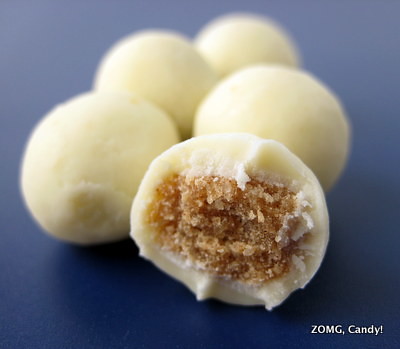 I enjoyed these in small doses, but their sweetness quickly compounded and became overwhelming. Still, they were a decent approximation of cinnamon bun flavor and texture in a non-perishable bite. An O.