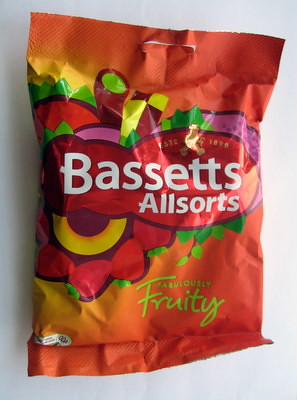 These were on display at Sainsbury’s, and I immediately snatched them up. I hate licorice (or liquorice here) and therefore have never been able to fully try normal licorice Allsorts. I say fully try because I’ve occasionally bitten into one, fooled by its bright, non-black colors, and then spat it out once I tasted it for what it really was. At any rate, I was happy to see that they also came in Fabulously Fruity flavors.

The fruit Allsorts were red strawberry licorice (which I don’t love but can tolerate) paired with fruity flavors like lemon, lime, and orange. The fat round ones with the red dots are Round Lemon and Round Orange, the long tubular round ones are Lime Rock and Orange Rock, the three-layered ones are Lime, Lemon, and Orange Sandwiches, the five-layered ones are Lemon, Orange, and Blueberry (the one with three white layers) Cubes, the checkerboard prisms were Lemon and Strawberry (white and red) Check, and the buttons were Bobbly Blackcurrant (purple) and Bobbly Strawberry. Phew! 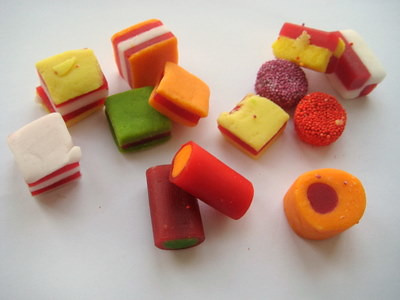 In real life, they’re a bit more neony and a bit less pastel-y than they look in the photo above. Unfortunately, I don’t have my usual candy shooting set-up while I’m abroad. I’ve been trying to shoot in sunlight near my room’s window, but it’s England. The sun doesn’t come out all that often, so most of my photos came out too dark and had to be more photo-edited than usual. My deepest apologies.

I don’t know what to make of Allsorts. I didn’t like them, exactly, but I also polished off the whole bag in three days (I guess that’s what happens when I don’t have my friends around to eat my candy leftovers for me). The red licorice bits are smooth and slippery while the rest of the colors are this weird grainy texture. The ingredients list wheat flour and dessicated coconut; one or both of those may be the cause of that. Strangely enough, the textural combination worked well in the cubes and sandwiches and checks; I only found the graininess to be overpoweringly unpleasant in the Rounds when there wasn’t enough strawberry licorice for balance. The fruity flavors were super brightly artificial, but in a tasty way, which may be why I found them strangely addictive. It also helped that they were mostly citrus flavors, which are my favorite.

The Bobbly pieces were tough gummi buttons covered in tiny nonpareils. I’ve seen the licorice versions sold on their own around here in bulk candy stores, but I don’t know about the fruity ones. They were okay, mildly fruity and pleasant enough, but they don’t hold a candle to the deliciously bright fruitiness of Jelly Belly’s Raspberries and Blackberries.

I kind of wish I had more of these to eat, but I also know better than to buy another bag. Actually, no, maybe I’ll buy another bag right before I leave. As quickly as I ate them, I’m unsure as to how much I actually enjoyed them in the eating process. An OM, I think, but proceed with caution. And for those who want a review of Bassett’s Licorice Allsorts, you’ll have to go to Cybele and Candy Blog for that, because you sure ain’t gonna get one out of me.