I think the unofficial theme for this week is something along the lines of “Candy that’s so fake tasting it may actually be a crime against nature.” Had I been paying attention when I picked these Brach’s Rich and Dreamy Chocolatey Cremes out of the bulk candy bins at my local HEB in Austin, TX, I never would have bought them in the first place. In the candy world, “chocolatey” is code for “not made of real chocolate” and is usually an indicator of candy badness. In this case, it was a sign of candy terribleness. Please note that they are not filed under chocolate. 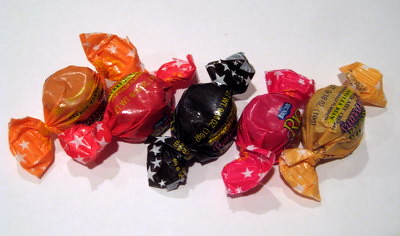 Flavors and how they taste:

I guess you could call the shapes of these to be like oversized Rolos. I only got a photo of the Double Dutch out of the wrapper (below) because I was too busy tasting nasty candy and spitting it out to remember to take pictures of the others. I think the orange, cherry, raspberry, and vanilla ones had unnaturally colored fillings, but I’m not sure. My notes on these are pretty sparse because I was so distracted by the terrible taste. In fact, I think it’s best if I just reproduce my notes below. 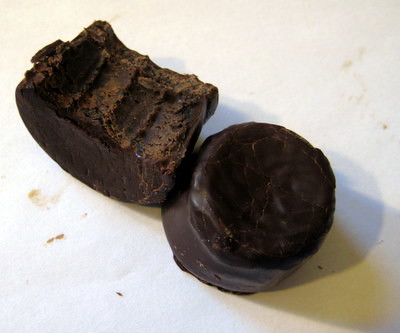 What is left off of my notes was exactly how mind-blowingly terrible they all were. Fortunately for this review, unfortunately for me, I still remember. My tasting process for these basically consisted of taking a bite, making a blech face, spitting out the bite, hurriedly jotting down notes so that I could taste the next one to get the taste of the previous one out of my mouth, make blech face, and so on.

Texturally, they were awful – gritty and grainy with a fake chocolate shell that cracked because it was so dry – and the fake chocolate just made the fake fillings taste worse. A —, coupled with a wish to rebrand them as Poor and Nightmarish and a temptation to tag these as “not candy”.

Taste of London and other food festivals

Today marks the start of the Taste of London festival in Regent Park, and I just happen to be hopping...