I don’t what these guys are actually called – the wrapper just says Juice and has some pictures of fruit on it – but I love them. I realize that’s not very helpful if you want to try to find them yourself, and I apologize. All I remember is that they came in a red bag that was square and rather flat, and I bought it at Asia Market in Austin. 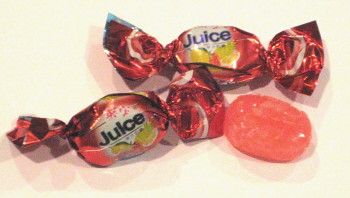 The flavor is difficult to describe; I’d call it a light, citrusy fruit punch that’s the perfect amount of sweet. The texture is perfect, as it’s crunchable and cleaves cleanly if you choose to chomp on it, but it melts beautifully in your mouth if you choose to savor it. Though I’m usually a hard candy chomper, I always try to force myself to savor these because they’re so good, and I usually succeed. An OMG on the ZOMG! scale. 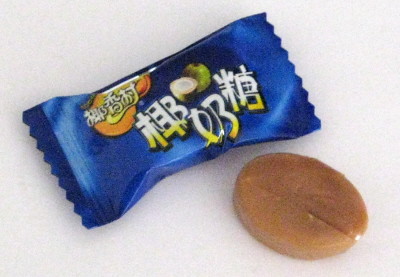 This coconut milk candy has the look and mouthfeel of a Werther’s Original (BUY!), and it melts and cleaves in the same way. While I have negative to ambivalent feelings towards coconut itself, I love coconut milk, and I love this candy. It’s lightly sweet and milky, with just the hint of coconut essence. Another OMG, if only because it’s managed to undo a lifetime of Mounds induced coconut-candy prejudice. And isn’t the wrapper gorgeous?

These are courtesy of Catherine, my chocolate-hating (!) suitemate from Hawaii, who brought them from, you guessed it, Hawaii. I adore Sour Patch Kids (BUY!), so I was excited to see how the Hawaiian version would stack up.

The texture is also not that of a real Sour Patch Kid. It’s much too firm, like Dots, and got horribly stuck in my teeth. The Li Hing Hula Girls also aren’t bright and fruity like real Sour Patch Kids, and as far as I can tell, they’re not sour. So basically these candies neither look nor feel nor taste like Sour Patch Kids, which makes me think that the Aloha Gourmet company may be treading on copyright issues, but they seem to be a rather small company, and I certainly don’t want to get them in trouble.

The Li Hing part of the candy is the rather unattractive brown coating (you can kind of see it in first the picture). The taste reminded me of the salty-sweet Asian plum candies my parents love so much, and lo and behold, Wikipedia says that li hing mui is a salty, dried plum (while I speak Mandarin, the name didn’t register because it’s in Cantonese). I don’t mind the li hing taste because I ate it as a kid, but I agree that it’s an acquired taste that not everyone would enjoy. 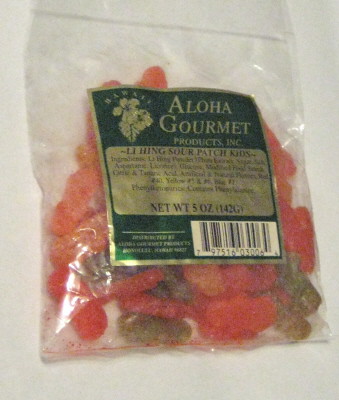 I think these Li Hing Sour Patch Hula Girls suffer because of the underlying gummi rather than the Li Hing flavor. A quick search shows that other companies seem to make versions using actual Sour Patch Kids, which would probably taste much better and be more texturally pleasing. I like the Li Hing flavor enough to want to try the other kinds of Li Hing coated gummis that I never knew existed. I give these an O for the execution, but I think a version with real Sour Patch Kids or other gummis would warrant an OM. The only logical next step would be to go to Hawaii and taste for myself – for the sake of this blog, of course.