Each Coconut Patty was heartily sized, 1.75 inches square, and there were 2 per pack in a cardboard tray. They were like topless Mounds: squares of moist coconut patties with the bottom and sides coated in a thin layer of dark chocolate.

The original had a plain, sweetened coconut patty that was pure white. The coconut was confettied and smooshed together, which gave the whole thing a sushi-like look. 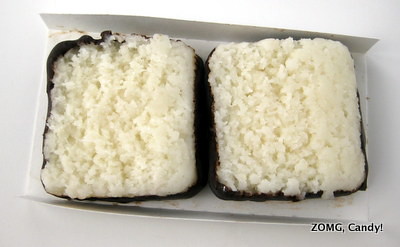 The coconut had a nice texture: lightly moist, soft, squishy, and a bit squeaky between my teeth. It tasted sweet and floral with a strong nutty and fresh flavor.

The dark chocolate component was minimal and mostly got lost in the coconut patty. When I ate it by myself, it was sweet and fruity. 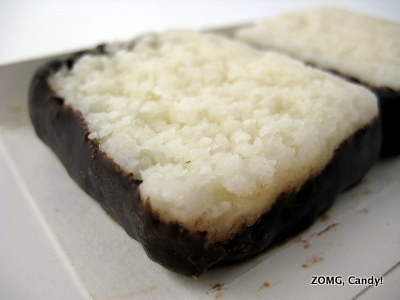 While the patty was great for the first bite or two, the sweetness of the coconut quickly became overwhelming. More chocolate to temper that sugary sweetness would’ve helped, I think.

Still, I was pleasantly surprised by the quality of this Dollar Store treat. The original gets an OM, as long as you eat the patties in multiple sittings.

Key Lime was just like the original, only the coconut was a fluorescent lime green. The patties had the same sweetly nutty coconut of the original but finished with a fruity lime zestiness. 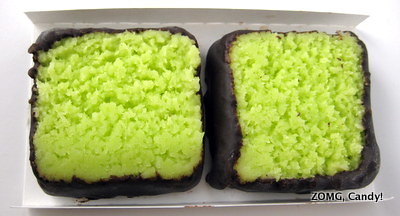 The lime flavor paired with the coconut and hint of chocolate was a set of flavors that I found more weird than pleasant. I ate most of the original patties on my own, but I haven’t taken more than a bite of the Key Lime ones. An O for the Key Lime version.

When I was a kid, I loved visiting my mom at work because she had a candy drawer full of...