Every time I go to Trader Joe’s, I end up spending more money than I mean to. They’re just so good at suckering me into making impulse buys, like this bag of their Dark Chocolate Honey Mints. 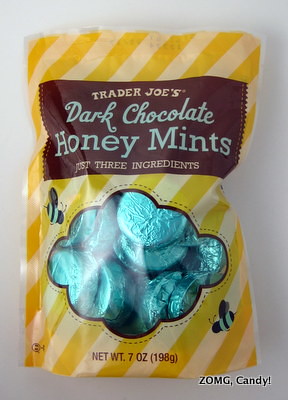 The bag was cutely decorated with drawings of bees and beehives. It also boasted that the Honey Mints had just three ingredients: honey, chocolate liquor, and oil of peppermint (and the potential for traces of milk as an allergen warning).

My 7 oz bag had 20 Honey Mints disks inside, each individually wrapped in shiny turquoise foil. They all smelled strongly minty with a sweet undertone. 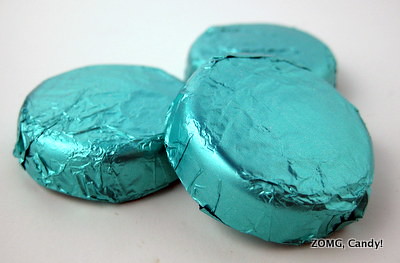 Each disk was about an inch and a half in diameter. They had a light golden peppermint fondant center covered in a thin layer of dark chocolate.

The smooth fondant was effervescent and minty throughout. It started off with a bright burst of initial sweetness and finished with a slightly bitter astringency from the chocolate. 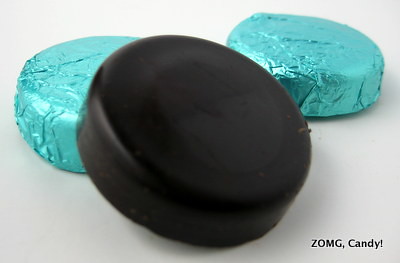 I think this treat could have benefitted from a little tweaking to that chocolate. It was slightly gritty, and the astringency was off-putting when I ate the Honey Mints slowly enough to notice it. A little cocoa butter in addition to the cocoa liquor would have helped with the texture.

They could be better. Still, Trader Joe’s should be commended for a minimalist, fairly tasty treat that provides a less processed alternative to York Peppermint Patties (in which corn syrup is a big player). An OM.