Thorntons seems to be pretty well known in England but unheard of in the US. I actually had this bar in America, a month or so before I arrived in the UK, courtesy of my British friend Michael (the same one who gave me all the Japanese candy that I’ve been reviewing. He’s British but lives in Kobe. And he’s also American because of his parents’ citizenship. Or something like that). I’m glad I didn’t let my impression of this bar turn me off on Thorntons entirely, for I’ve since had fresh stuff straight from a Thorntons shop that I liked much better than this bar.

The wrapper bills this as “delicious milk chocolate, dusted with icing sugar, and a golden roasted hazelnut and almond praline center.” Too many commas in that sentence, I think. From what I can tell from browsing the Thorntons website, this chocolate bar is the bigger version of their Alpini truffle. I think it was better off little, since it doesn’t look like much as a chocolate bar. Mine, at least, was somewhat irregularly formed, and while the uneven coating of powdered sugar looks nice on the truffles, it just looks sloppy on the bar.

The center was quite creamy and hazelnutty, but not in the nice roasty hazelnut way that I love. Instead, it tasted rather artificial, making it not unpleasant, exactly, but nothing to crow about. The almond praline of the center gives the whole thing a nice crunch and a super sweet tinge. For me, the chocolate coating was unremarkable, but I’ve since had better Thornton’s truffles with nicer chocolate, so I think it may have been a lack of freshness issue with the bars. 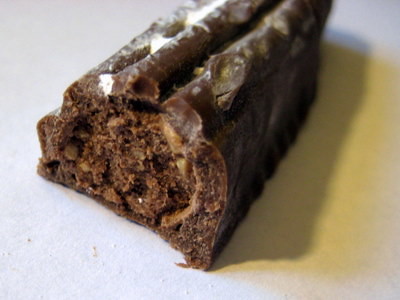 Overall, I found this bar to be overly sweet for me, though others may like it. Again, I’ve since had a few of their truffles, singularly purchased straight from the shop, and I liked those more. Freshness, I’m sure, has a lot to do with it, and I’m wondering if I’ve lately developed even more of a sweet tooth – that is, a highly tolerance for sweetness – recently. Something to ponder, I suppose. At any rate, this bar warrents just an O; I had no desire to buy more Thorntons bars when I visited the shop, and I still don’t.