A continuation of Monday’s review, the next five chocolates in my Schocolat box.

First up at the top, a salted caramel that wasn’t in their chocolate guide, I guess because they’re usually sold in boxes of all caramels. As with the bunny chew from Monday, it’s a stiff caramel that really gets in your teeth. The salt offsets the brown butter flavor nicely, though I wish the flavor developed a bit more as you chew it. Still, a lovely treat and OM-worthy.

Moving clockwise is what I think is a Gianduja, “layers of hazelnut flavored milk and dark chocolate dipped in milk chocolate finished with a candied hazelnut.” I say think because it tasted more like peanut butter than Nutella to me and my friends. Sadly, the nut topping was so candied that I couldn’t tell what kind of nut it was.

The dark and milk layers were visible in the super stiff ganache, and the whole thing had a roasty nuttiness with a creamy chocolate finish. An OM, regardless of my nut uncertainty. 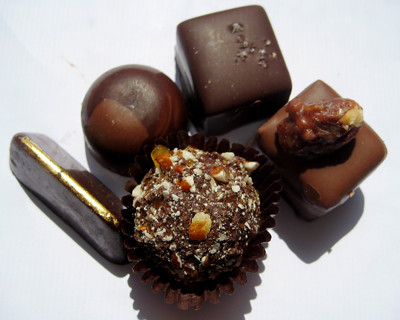 Next is the round rolled-then-enrobed truffle, the only one in the box that wasn’t molded and another one that was off the guide. My friend Rita bit into it first and made a blech face. Surprise! It’s banana, which Rita is allergic to.

Specifically, it’s a white chocolate ganache. It has a strong banana flavor with a sweet, white chocolate finish. The dark chocolate coating was studded with bits of candied almonds. Nice, but not for me (or Rita), so an O.

The creamy ganache had a light, barely noticeable cinnamon spice and heat to it, with more cinnamon in the finish. A lovely, perfectly balanced blend that gets an OMG.

And last for today, the dark and milk domed truffle that’s also off guide. It’s definitely peanut butter with a super roasty finish. An O, not because it’s bad, but because I’m not that big on peanut butter.

It also makes me more sure that we correctly identified the Gianduja. I think the Gianduja didn’t taste hazelnutty enough because it was made with actual hazelnut butter, thus the more-subtle-than-Nutella flavor.

So – back on Friday for the rest of the box. It gets even better!